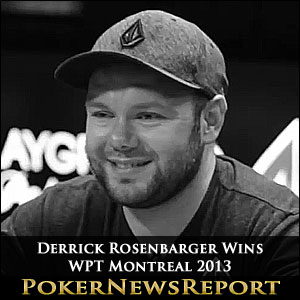 The conclusion to the PartyPoker WPT Montreal Main Event produced a surprise winner in 30-year-old Derrick Rosenbarger, who – an Air Force pilot by trade – was competing in his first ever WPT Main Event and entered the final table of the tournament in fifth place.

Rosenbarger battled through a final table comprised of vastly more experienced poker players to start the heads-up against Mukul Pahuja (rated 310th on the Global Poker Index) with a 2:1 chip deficit. However, the player from Clovis, New Mexico produced a cool performance under pressure to overturn the deficit in an extended heads-up session and win the $500,824 first prize.

When the six remaining players took their seats for the final table of the WPT Montreal Event, there was an air of anticipation. Chip leader Sylvain Siebert had ridden his luck to retain his position at the top of the leaderboard, and Serge Cantin had emerged as a genuine contender for the WPT title. Also at the final table was Lily Kiletto – aiming to become the first female winner of an open WPT Main Event, but having a mountain to climb with just six Big Blinds in front of her.

Kiletto Survives – for a While

The start of the WPT Montreal final table began as many people had expected – Lily Kiletto shoving in the first hand and collecting the blinds and antes (40,000/80,000 – ante 10,000). Kiletto got the double-up she needed in the fourth hand of the day, when hitting trip Eights against Mukul Pahuja (A♥ 8♥ > 2♥ 2♠) and then doubled-up again in the fourteenth hand of the final table K♥ J♥ > 9♥ 7♥ against Sylvain Siebert.

Serge Cantin took an early at the final table when calling Sylvain Sieberts´s River bluff bet to take 2 million chips from the former chip leader, and then moved through the 10 million chip barrier when eliminating Alexandre Lavigne in sixth place 10♥ 10♦ > K♥ 8♣. Lily Kiletto´s precarious life lasted just a few more hands – eventually departing in fifth place when she ran her A♠ 8♥ into the A♣ Q♣ of Sylvain Siebert, and the Q♠ was the first card out on the flop.

Rosenbarger on the Rise – Siebert and Cantin Bust

Reduced to just four players, the action slowed down on the final table of the WPT Montreal. Derrick Rosenbarger was extremely fortunate to get a double-up against Serge Cantin Q♣ 9♣ > A♦ K♣} on a nine-high board after all the chips went in pre-flop, but there was no luck about the way he crippled Sylvain Siebert Q♥ Q♣ < 4♦ 4♣ after Siebert had shoved all-in on a flop of A♦ Q♦ 10♥.

Siebert was bust in fourth place when his A♦ 6♦ failed to connect with the board against Serge Cantin´s 8♥ 8♣, but Cantin´s tournament life was not to last much longer – being forced off a couple of big pots by Mukul Pahuja before Cantin and Pahuja got involved in a pre-flop raising war which saw Cantin shove for his tournament life with 8♦ 8♠, and Pahuja make the call with A♥ K♣.

Rosenbarger Takes Lead – then Pahuja Fights Back – then Rosenbarger Wins

It did not take long for Derrick Rosenbarger to move into the chip lead in the heads-up climax to the WPT Montreal Main Event. In the twelfth hand of the encounter, he scored a valuable double up Q♥ 6♣ > K♦ 10♦ when all the chips had gone in on a flop of 6♦ 2♦ 2♥ and Pahuja missed his flush draw. However, Rosenbarger then missed his own flush draw – and relinquished the chip lead – with K♣ 3♣ < Pahuja´s paired 9♥ 6♣.

Some aggressive pre-flop play and two uncontested post-flop shoves enabled Derrick Rosenbarger to close the gap on Pahuja, and then a huge double-up 10♠ 8♠ > Q♠ 7♥ on a flop of A♠ 8♣ 8♥ changed the whole dynamics of the event, as it gave Rosenbarger a 20.25 million -v- 5.6 million chip advantage.