One of the key issues in the Groupe Bernard Tapie (GBT) takeover of Full Tilt Poker has been reported to have been resolved. 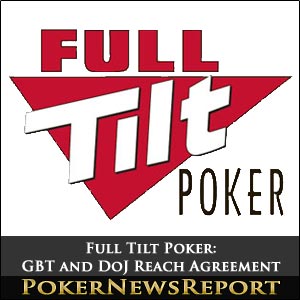 One of the key issues in the Groupe Bernard Tapie (GBT) takeover of Full Tilt Poker has been reported to have been resolved.

Ever since GBT had announced that they intended to take over the beleaguered [geolink href=”https://www.pokernewsreport.com/online-poker-rooms”]online poker site[/geolink], it was made clear that the deal hinged on reaching agreement with the US Department of Justice (DoJ) about the size of the fine that the new owners may be faced with and the destination of funds seized by government authorities over the past few years. Now it would appear that a suitable arrangement has been negotiated “in principal”.

In an email to the directors of Full Tilt Poker, Tiltware CEO Ray Bitar outlined the details of the agreement.

I am pleased to announce that today the Department of Justice and Groupe Bernard Tapie have reached an agreement in principle regarding the acquisition of the companies comprising Full Tilt Poker. My understanding is the deal provides that in exchange for an agreed upon payment by GBT, and a GBT commitment to assume responsibility for payment of ROW players, DoJ will reimburse US players and settle the outstanding civil litigation with the companies comprising FTP. Beyond these conditions, issues like the time frame and process for repayment of players remain unclear at this point and time.

With DoJ’s consent now in hand, GBT may now proceed to finalize an agreement to acquire the companies or assets that comprise FTP. That agreement will very likely address the status of your shares or interests in the successor company. When I receive that agreement, I will coordinate with our attorneys to ensure the terms of that proposed agreement will be shared with the membership and voted on.

Awaiting Confirmation of the Deal

Even before the announcement of GBT´s interest in taking over Full Tilt Poker, the Department of Justice had issued a statement at the end of September that they may repay Full Tilt Poker debts, so the announcement does not come as much of a surprise. The US Department of Justice is still to confirm that an agreement has been reached, as have lawyers representing Groupe Bernard Tapie, but before anything can be cemented the shareholders of Full Tilt Poker still have to vote on whether they accept the terms of the GBT Takeover.

Probably not in terms of what stateside ex-Full Tilt Players wanted. A structured payment from the Department of Justice may require players to declare their bankrolls and pay tax on their Full Tilt Poker “winnings”. For players in the rest of the world, it is still unclear how much of the debt owed to them by Full Tilt Poker is going to be repaid to them in company shares, in stages over a year or with a withdrawal penalty. So, the best possible solution for Groupe Bernard Tapie and the directors of Full Tilt Poker, but still the same old lack of regard for the interests of the players.