This coming weekend sees a repeat of Americas Cardroom´s “Double Guarantee” $100,000 Sunday feature tournament, and once again a big overlay is expected. 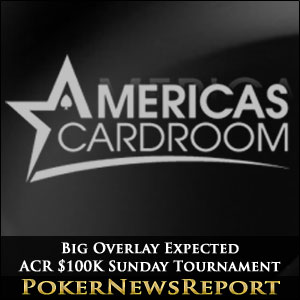 This coming weekend sees a repeat of Americas Cardroom´s “Double Guarantee” $100,000 Sunday feature tournament, and once again a big overlay is expected.

Americas Cardroom may be one of the fastest growing US-friendly online poker rooms, but it is unlikely to find enough players by next Sunday (August 11th) to prevent an overlay in its promotional “Double Guarantee” $100,000 tournament. Over recent weeks, around 300 players have ponied up the $215.00 buy-in or qualified through Americas Cardroom extensive satellite program, but finding a further 200 players to meet the guarantee this week is going to be a big ask.

This is the third month in succession that Americas Cardroom has doubled its regular $50K Sunday tournament, and on both previous occasions it has been an expensive promotion. This coming Sunday the site has scheduled the $100,000 guaranteed tournament at 7.00pm EDT (11.00pm GMT) and possibly hopes to pick up early fallers from the Super Satellite to the Americas Cardroom-sponsored Punta Cana Poker Classic which starts an hour earlier.

Registration has already started for the Americas Cardroom $100,000 guaranteed event which starts at 7.00pm EDT (11.00pm GDT) and has late registration for 12 levels (3 hours). Unlimited re-entries are also available for the first three hours but, looking back over the past few weeks results, nobody has used this option recently if they have lost their 10,000 starting chips at the beginning of the game.

A special satellite program into the tournament has been scheduled for this week, which will see sub-qualifiers with a $1.00 buy-in being played hourly at 35 minutes past the hour – each feeding into a nightly $24.00 buy-in super satellite which guarantees 2 seats into Sunday´s $100,000 guaranteed event. Effectively, you could win a share of the $100,000 prize pool on Americas Cardroom for just $1.00!

An hour before the chips start flying in the $100,000 guaranteed poker tournament, Americas Cardroom is also hosting a $55.00 buy-in qualifier for the $500,000 Punta Cana Poker Classic in November with ten $4,100 packages guaranteed.

The Punta Cana Poker Classic will be played at the Hard Rock Café & Casino in the Dominican Republic, and the packages up for grabs on Sunday night include the buy-in for the Main Event, return air fare (up to $800.00), six nights all-inclusive accommodation at the Hard Rock Café, transfers to and from the airport, and $1,500 credit at the resort to spend on golf, spa treatments and hotel excursions.

The full schedule for the Punta Cana Poker Classic has just been released and includes a $5,000 buy-in Hi-Roller´s Event plus eight other side events.

August could be a very good month for players on Americas Cardroom. In addition to the site´s first deposit bonus of up to $1,000, Americas Cardroom is also celebrating the first anniversary of its rake race promotion – “The Beast” – by giving away $51,000 in daily, weekly and monthly leaderboard prizes. Combined with the potential overlay in the site´s $100,000 guaranteed tournament this weekend, there appears to be a lot of value available on Americas Cardroom at this time.