Americas Cardroom is giving an anniversary present of $51,000 to players who play at their Beast Jackpot tables to celebrate the promotion´s first birthday. 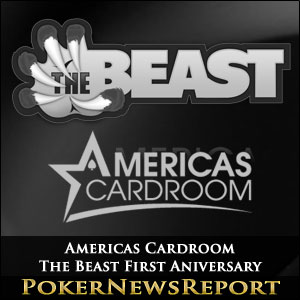 To celebrate the first anniversary of the Beast progressive rake promotion, Americas Cardroom is giving away $51,000 in additional Beast Bonuses.

The Beast is just one of many valuable ongoing promotions at Americas Cardroom – the biggest poker room on the US-friendly Winning poker network – and to celebrate a year in which the Beast has paid out almost $2 million in cash prizes and tournament entry vouchers, the site is adding $51,000 in daily and weekly Beast leaderboard competitions throughout the month of August.

What is The Beast?

The Beast is the world´s first progressive rake promotion in which players participating at selected promotional tables pay a premium to the rake deducted from the pot, which is then added to the prize fund for the month. Players are then awarded points for their “contributed premium”, which determine their monthly leaderboard position.

The winner of the Beast in recent months has collected around $12,000 in cash bonuses, but players who finish the month within the “Beast Bubble” can pick up valuable prizes – last month 350th place paid $76.59 and the top 500 players each received tickets for a $55.00 qualifier in which they could win a Punta Cana Poker Classic package worth $4,100.

Promotional tables are indicated by the initials “JP” in the Americas Cardroom lobby, and are most commonly played at NL Hold´em and PL Omaha at limits from $0.05/$0.10 to $15.00/$30.00. The Beast promotion results in some of the tables being considerably loose (looser than the non-promotion tables) and disciplined players often enjoy lucrative sessions at these tables.

Beast points which are earned each day will be carried forward to the weekly leaderboard competition and also count towards players´ positions on the monthly leaderboard.

Americas Cardroom is the most popular poker room on the Winning Poker Network – a network which accepts real money poker players from the US and which has established a reputation fast cashouts to both players in the US and from the rest of the world.

The volume of traffic at Americas Cardroom has grown steadily since 2011, primarily because of initiatives such as the Beast, but also because the site allocates VIP Points for its first deposit poker bonus and “Elite Benefits” Loyalty Program using the dealt rake method.

The Beast´s Birthday Bonus gives players who have not yet played at Americas Cardroom the perfect excuse to visit the site right now and benefit from the anniversary promotion while clearing the generous Americas Cardroom poker bonus of 100% on first deposits up to $1,000. Find out more in our Americas Cardroom review.