The company responsible for the world´s most popular freeplay poker game – Zynga – has withdrawn its application to provide real money online poker in Nevada. 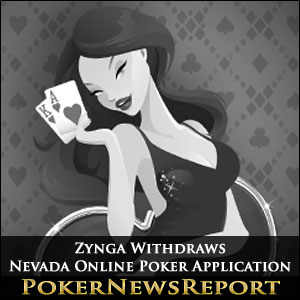 The company responsible for the world´s most popular freeplay poker game – Zynga – has withdrawn its application to provide real money online poker in Nevada.

Earlier this year – in the company´s Q2 earnings report – Zynga indicated its intention to abandon plans for real money online poker in Nevada. A statement within the report said that while the company would continue to evaluate its real money poker product in the UK (Zynga Plus Poker), Zynga had made the decision not to pursue a real money gaming licence in the US.

Speculation at the time suggested that Zynga may be putting their plans for online poker in the US on hold until a Federal solution materialised; as the resources required to pursue individual operating licences in Nevada, New Jersey and Delaware could not be justified by the potential returns. However it appears that the intention to withdraw has now been confirmed.

Application to Withdraw on NGCB Agenda

Nine months after Zynga first applied for a license to offer real money online poker in Nevada, an entry on the Nevada Gaming Control Board agenda for September 29th reads that Mark Jonathan Pincus (co-founder of Zynga) and five other company executives request to withdraw [their] applications for a preliminary finding of suitability.

This preliminary finding of suitability was only the first stage of the licence application, and the fact that this was only as far as Zynga got with their application indicates that the company reviewed its position and found it could not compete with the likes of Caesars Entertainment in Nevada and PokerStars in New Jersey and Delaware.

Zynga more for Gaming than Gambling

Writing in the Forbes online magazine, Nathan Vardi suggested that the appointment of Don Mattrick as CEO of Zynga indicated a shift away from real money gambling to what the company is better known for – gaming. Mattrick sold his first gaming business to Electronic Arts and stayed on with EA to develop games such as FIFA Soccer and the Sims. He has also worked with Microsoft and is credited with the success of the X-box.

However, Mattrick (and Pincus) have no experience in the online gambling industry and have probably come to terms with the fact that the majority of people playing their incredibly popular Zynga Poker app are under the age of eighteen and live in Asia, and therefore the Zynga brand would not have the desired results when it came to the success of an online poker product in Nevada.

Zynga will continue to offer Zynga Poker Plus in the UK in partnership with Bwin.Party, but it would appear that any further involvement with real money online poker is definitely off the table following the withdrawal of the company´s application for an online poker license in Nevada.