Despite a fourth quarter loss of $435 million, Zynga, the online gaming behemoth featuring free-play games such as Zynga Poker, Zynga Casino and Farmville, reported revenue of $1.14 billion in 2011. 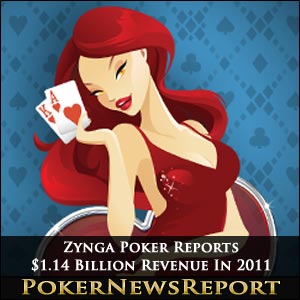 Despite a fourth quarter loss of $435 million last year, Zynga, the online gaming behemoth featuring free-play games such as Zynga Poker, Zynga Casino and Farmville, reported revenue of $1.14 billion in 2011.

In releasing its financial report, the company’s first as a public entity, Zynga showed enormous growth in the fourth quarter of 2011, yet still suffered a huge loss because of a tax charge of $510 million and additional expenditures related to its initial public offering just two months ago. Some of the costs were also attributed to an influx of new employees, as well as investments in new products and the latest technology.

Zynga Poker, the free-play game available through Facebook that was launched in 2007, has reported well over 30 million monthly players throughout the world. It is widely believed that Zynga representatives are in partnership negotiations with several casino companies to offer real-money online poker and casino gambling to its many users, especially with the likelihood of internet poker legislation being enacted in the United States. With its gigantic customer base, the profit potential is enormous.

In November, Zynga Poker was invited to participate in the International Federation of Poker’s Nations Cup in London, a “duplicate poker” contest that consisted of teams representing 11 countries, as well as an additional twelfth team featuring players from “the digital nation of Zynga.” Similar to duplicate bridge, duplicate poker focuses on the intellectual elements of the game and uses preset decks of cards identical at each poker table with points awarded to players according to skills utilized in the playing of hands in comparison to the plays made by opponents at other tables holding the same hands.

In a sweepstakes held on its site, Zynga selected six poker players to represent Team Zynga in the inaugural Nations Cup competition. Consisting of two Americans, three Canadians and an Israeli, the amateur Zynga players held their own against some of the globe’s top poker professionals. Team Zynga led the way through part of the initial round of action, eventually finishing fourth among the 12 teams.

Zynga’s 2011 fourth quarter revenue was slightly more than $311 million, an increase of 58.9 percent over 2010 fourth quarter revenue totals. Yearly revenues were substantially more impressive, skyrocketing more than 90 percent higher in 2011 than the previous year. Zynga is predicting more growth for 2012, although the latter half of the year is expected to report higher net gains than the first six months.