Zynga Poker, Facebook’s free-play game that has attracted a whopping 30 million active monthly players worldwide and recently sent a team of six amateur players to compete against poker pros in the Nation’s Cup in London, has no current plans to provide online poker services in a real-money market. 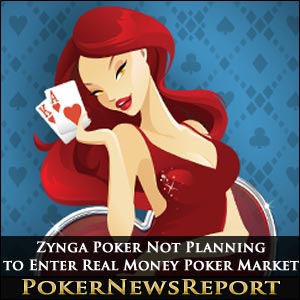 Zynga Poker, Facebook’s free poker game that has attracted a whopping 30 million active monthly players worldwide and recently sent a team of six amateur players to compete against poker pros in the Nation’s Cup in London, has no current plans to provide online poker for real money.

Since launching in 2007, Zynga Poker has developed a massive customer base that many poker insiders believe would be an attractive factor in entering into a partnership agreement with a land-based casino in anticipation of legalization of [geolink href=”https://www.pokernewsreport.com/us-poker-sites”]online poker in the U.S.[/geolink] But Zynga is intent on continuing its play-for-fun and virtual currency monetization model that has been working so well for the past four years.

Zynga Casino General Manager Lo Toney explained that the company remains committed to the user experience. “We are in the virtual goods business and we have been able to create a good business for ourselves like this,” Toney said, “so we have no plans to enter the real-money market.”

“The payment model for the company is that we develop free-to-play games and then monetize a smaller percentage of our players,” Toney added. “People will pay to purchase chips to play in games and to buy bingo cards – I still think the majority of players will play for free and others will purchase chips.”

Just last month, the company unveiled Zynga Casino, following Facebook’s modification of its rules on gaming advertisements, allowing bingo to join internet poker on the company’s portfolio. Toney said that he wasn’t concerned about the possible threat encountered by a substantial increase of egaming operators appearing on the social network through ads or play-for-fun products similar to those introduced by Chiligaming two months ago.

“We have historically faced many competitors and we have always focused on providing the best experience to our customers,” Toney said. “We want to make sure we can continue to provide that experience which has got us to 30 million players every month.”

Although the potential revenue for Zynga in a regulated industry could be enormous, remaining with the status quo of a proven brand seems to be the direction the company is headed. “The way we look at things is if it ain’t broke don’t fix it,” Toney said. “We will continue to focus on our brand and bettering ourselves, and that is how we have grown the company until now, creating games that are fun, social and free-to-play.”

Duplicate poker is similar to duplicate bridge, focusing on the game as a mind sport and designed to reduce the element of luck. Using decks of cards that are preset and identical for players at each table, players tally points using their skills and comparisons are made to the way their opponents play identical hands at the other tables. The tournament was played as part of an International Mind Sports Festival that ran from last Thursday to Sunday in London.

Zynga held a sweepstakes for its poker players to award the opening spots on Team Zynga to six of its most loyal players among the estimated 30 million active monthly players on the free-play site. The Zynga amateurs, made up of three Canadians, two Americans and one player from Israel, were up against many of the world’s top pros from the 11 other countries participating in the event.

Team Zynga’s members prepared for the tourney in various ways. “I’ve been playing alot of online poker,” said Roger Ellis, from Yukon, Canada. “The key for me is to stay calm and focused on the game. I hope I can do great for my team.”

Brian Turnbull of Alberta, Canada had a different take on getting ready to take on the pros as a Zynga player. “I haven’t done any preparation,” Turnbull admitted. “If I don’t know how to play by now, I don’t think I’m going to get it in just a few days time.”

Team Zynga made an impressive showing in the competition, leading the way through most of the first round before finishing in fourth place. Not bad for amateurs with very little experience playing live poker, especially against some of the world’s best professionals.

“The fact that we are represented as a ‘digital nation’ speaks so much about how we have been able to exercise our vision,” Toney said. “A lot of people have said the number of people we have playing Zynga Poker makes us like a country so why shouldn’t we have a team playing in the Nations Cup?”

The worldwide reach of Zynga Poker as a social network is confirmed by another Team Zynga player. Margaret Hailey of Ontario, Canada met her husband, Tanuj, who hails from Turkey, while playing poker on Zynga. They met three years ago and married in Turkey last April. “A lot of my friends that I met on Facebook are through Zynga Poker,” Hailey said. “I always have a friend that I can play with online.“