Zynga will transition from social gaming to real-money online gambling in the UK market in early 2013 per a partnership agreement with Bwin.party. 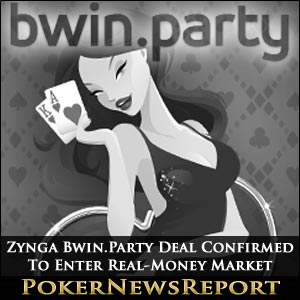 Zynga will transition from social gaming to real-money online gambling in the UK market in early 2013 per a partnership agreement with Bwin.party.

The deal calls for Zynga and the parent company of PartyPoker to offer Internet poker and other online games such as roulette, blackjack and slots. Zynga will not have to obtain licensing, as the agreement allows the parties to operate under Bwin.party’s online gaming license issued in Gibraltar.

Today’s announcement is another example of our success in leveraging our assets through strategic blue-chip partners, stated Bwin.party co-CEO’s Norbert Teufelberger and Jim Ryan in a press release. Zynga is the world’s leader in social games with hundreds of millions of active players worldwide and a significant player base in the UK. We are delighted to have been selected as their chosen partner for this important step in their evolution, and hope to expand our relationship into other products and markets.

Zynga’s plan to enter real-money Internet gambling was announced in July following its huge success in social gaming on Facebook that included Zynga Casino games, Farmville and Zynga Poker. Several online gambling companies were interested in partnering with the social gaming giant after CEO Mark Pincus publicly stated that a foray into the real-money marketplace by Zynga seemed to be a natural fit. The company made further strides toward embarking on its plan in August by hiring 888 Holdings’ former senior VP of regulated markets Maytal Ginzburg Olsha and assigning her the role of chief operating officer for new markets.

Zynga’s success led to an initial public offering of the company’s stock in December at $10 per share. That share price may well have been overvalued as it fell rapidly since first going public and stands at just over $2 today. The company took further measures to reduce costs yesterday by announcing the slashing of 5% of its workforce and the closing of several studios. The deal to combine player pools with Bwin.party appears to be coming at a good time for the financially struggling Zynga.

Bringing together Zynga’s expertise in social gaming with the top international real-money gaming operator is the best way to create the highest quality gaming experiences for our players in the UK, said Barry Cottle, executive vice president of corporate and business development for Zynga. Partnering with an established leader like Bwin.party is a strategic and prudent way for us to enter a key [real-money gambling] market while giving local players the real-money games they’ve been asking us for.