Zynga has applied to the Nevada Gambling Control Board as a first step towards preparing to offer real money gambling in the US if new legislation comes through. 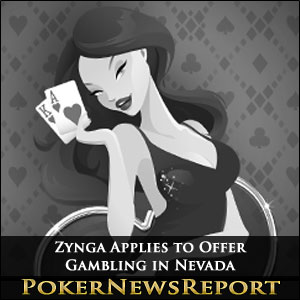 Zynga has applied to the Nevada Gambling Control Board as a first step towards preparing to offer gambling in the US for real money if new legislation comes through.

Zynga is preparing for possible changes in the legislation surrounding real money gambling in the US by filing their preliminary paperwork with the Nevada Gambling Control Board. As a first step, the Board must offer a preliminary finding that Zynga is suitable to hold a gaming license in Nevada.

The finances and regulations of the company will come under scrutiny before the Board will conclude its evaluation. This step in the process is expected to take between a year and eighteen months to complete and it is only once this phase is complete that they can apply for a gaming license. It would be some time until the actual gambling license is awarded, even once the preliminary stage has been cleared.

Zynga is actively seeking new revenue opportunities after it posted a loss for Q3. It has seen its shares drop by more than 75% this year and the possibility of offering real money games in the US is appealing.

As we’ve said previously, the broader US market is an opportunity that’s further out on the horizon based on legislative developments, but we are preparing for a regulated market.

Nevada is the first US State to legalize online poker and a number of larger operators have been awarded licenses. MGM Resorts International has been approved to partner with the UK-based Bwin.Party Digital Entertainment and Caesars Entertainment Corp has recently been awarded preliminary approval for their license.

While Nevada offers a small player base, there are currently other states that are considering a modification of their legislation and may consider forming compacts with Nevada in order to merge markets and create larger player bases.

This move by Zynga follows closely on the heels of their announcement that they are working toward real money poker and casino games that will be available in the UK early next year. They plan to partner with Bwin.Party Digital Entertainment for this venture.

While their filing in Nevada is only in its preliminary stages, it will allow them to move quickly once the regulatory issues have been ironed out and give them the chance to partner with big names in the State.