A recently released Bwin.Party trading update focuses attention on PokerStars’ Zoom Poker as the reason for a decline in revenue. 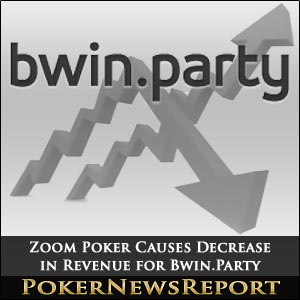 A recently released Bwin.Party trading update focuses attention on PokerStars’ Zoom Poker as the reason for a decline in revenue.

The July 10 update from the parent company of PartyPoker alludes to “continued pressure” in the online poker marketplace as being the result of the launching of Zoom Poker, which has taken a huge chunk of the fast-fold Internet poker market.

High-speed poker was first introduced by the launching of Full Tilt’s Rush Poker in early 2010. But Black Friday and the allegedly fraudulent financial practices of the board of directors of that company resulted in Full Tilt’s demise, which left a void in the market of the fast-fold variation of poker. That void is now being filled by Zoom Poker, as well as newcomers to the fast-fold phenomenon, such as iPoker’s Speed Hold’em and Blaze Poker on the Microgaming Network. Bwin.Party plans to get into the game by rolling out a version of fast-fold poker sometime this year.

Bwin.Party is also planning to integrate its Bwin poker site on the Ongame Network with its PartyPoker site, which will increase the player pool at PartyPoker by some 20%. The company also owns the Ongame Network and has put the fifth-ranking poker network in terms of player traffic on the trading block. Six potential buyers have expressed interest in acquiring the network after Shufflemaster recently backed out of the deal. Zynga is reportedly one of the suiters who is looking to acquire Ongame and enter the real-money poker marketplace after establishing a massive player pool on its free-play social gaming site through Facebook.

The Bwin trading update enthusiastically alludes to potential online poker profits on the horizon due to Delaware joining Nevada as states that have legalized online poker. Also, several other states are still working on the approval of online gambling legislation. Bwin.Party is encouraged by these developments, but is more inclined to believe that federal online gaming regulation remains the preferred solution. With several agreements already in place with casino companies and Indian tribes in various states, Bwin.Party is poised to be a major player in the [geolink href=”https://www.pokernewsreport.com/us-poker-sites”]U.S. online poker marketplace[/geolink].

Bwin.Party’s update shows positive overall performance that met company expectations for the second quarter due to increased revenue from its online casino and bingo platforms. Revenues faltered a bit in sports betting, as Euro 2012 wagering profits were not as high as was hoped due to the results of games being somewhat predictable. In light of Zoom Poker’s success and the ensuing poor second quarter performance seen from its poker offerings, Bwin.Party hopes that its own fast-fold poker version, the merging of Bwin Poker with PartyPoker, and online poker regulation in the U.S., will help to bolster its revenue from its poker platform.