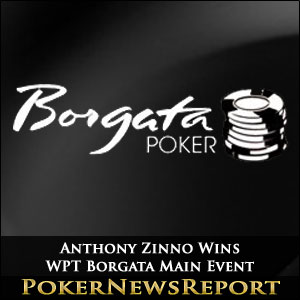 As the final table of the WPT Borgata Poker Open Main Event approached, most observers were anticipating an exciting conclusion between the two players going into the climax of the event with the biggest stacks of chips – Cong Pham and Vanessa Selbst.

However, Anthony Zinno had quietly assumed third place in the overnight chip counts, and when it came to the business end of the tournament, he found the right cards at the right time to win the WPT title and first prize of $825,099.

When the six remaining players returned to the ballroom of the Borgata Hotel & Casino on Friday, they were resuming the tournament two hands into Level 31 (blinds 50,000/100,000 – ante 10,000). Cong Pham had been in control of the event for two days, while Vanessa Selbst had been the more active player, and had risked her tournament life on more than one occasion.

No Hanging Around on this Table

The start of the WPT Borgata Poker Open final table was pretty explosive. David Randall three-bet shoved against Cong Pham´s pre-flop raise in the second hand of the day (Pham folded and Randall added 575,000 chips to his stack), and this set the tone for the intensity of action that was to follow.

Vanessa Selbst´s chip stack took an early knock when she first shipped more than a million chips to Cong Pham (9♦ 8♦) when the chip leader flopped two pairs against her Ace-high, and then she donated 2 million chips to Jeremy Kottler´s cause, when Kottler´s A♥ 9♥ on a nine-high board was good enough to best Selbst´s hand.

Kottler had also taken chips from Eric Fields in a previous hand – reducing Fields to just 1.6 million chips. Needing a quick recovery, Fields moved all-in with J♣ J♦ in Hand #15 of the final table and was called by Cong Pham (A♦ K♣). Fields’ pocket Jacks were in front after the flop and Turn of 9♥ 7♦ 5♦ / 6♦, but the A♠ on the River gave Pham the better pair and Fields was the first player to leave the table in sixth place.

Vanessa Selbst’s poor start to the final table continued in Level 32 (blinds 60,000/120,000 – ante 20,000) when she raised Jeremy Kottler to 1.3 million chips during the pre-flop action and he responded by moving all-in. Selbst tanked for a moment before giving up the hand – moving Kottler into second place while she was reduced to being the shortest-stacked of the remaining players.

However, it was David Randall who was to be the next player to depart – moving all-in with J♦ J♠ in Hand #44 of the final table and getting a call from Kottler (A♥ 9♥). The A♦ on the flop paired Kottler´s hand and, with no surprises on the Turn or River, Randall was bust in fifth place, while Jeremy Kottler cemented his second position and now had 8,985,000 chips.

Kottler and Selbst in Reversal of Fortunes

Selbst then took a three-way pot with pocket Jacks to temporarily take the chip lead from Kottler, before Kottler doubled-up Cong Pham A♣ K♥ > A♦ J♠ and was then eliminated by Vanessa Selbst when calling her A♥ 6♣ shove with pocket Fives. The A♣ on the Flop gave Selbst the lead in the hand and the A♦ on the Turn confirmed Jeremy Kottler´s exit from the tournament in fourth place.

Meanwhile, while all the above action had been taking place, Anthony Zinno had been quietly chipping up without ever being at risk or getting involved in major hands. As the game went three-handed, Zinno was the shortest stacked of the three players – but was no way in trouble, with almost 45 big blinds.

As the game entered Level 35 (blinds 120,000/240,000 – ante 40,000) Anthony Zinno put his tournament life at risk for the first time at the final table when getting a valuable double-up against Vanessa Selbst J♣ J♠ > A♠ 9♥ – which elevated him into a substantial chip lead. However, Vanessa Selbst recovered quickly courtesy of a major bluff against Zinno and then a double-up A♠ J♦ > A♦ 9♦ – again against Zinno, which left her with more than half the chips in play, while Pham and Zinno both had around 35 big blinds each.

The heads-up was set when Cong Pham moved all-in pre-flop in Hand #111 with A♠ Q♥ and Zinno quickly called with A♦ K♠. The K♣ on the flop sewed the hand up for Anthony Zinno and Cong Pham was out of the tournament he had led for so long in third place.