It was another action-packed Sunday on PokerStars. Not only did the Sunday Million and Sunday Warm-Up take place like every week, but due to it being the last Sunday of the month there was bonus tournaments available… 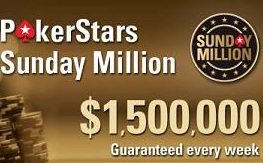 It was another action-packed Sunday on PokerStars. Not only did the Sunday Million and Sunday Warm-Up take place like every week, but due to it being the last Sunday of the month there was bonus tournaments available with the Turbo Takedown and Battle of the Planets also taking place.

The Sunday Million is the weekly poker tournament which all players dream of winning however, and this week a Brazilian player with the alias ‘Zareta’ proved victorious, winning $230,513.93 after reaching a deal and defeating ‘marado86’ heads-up.

This weeks Sunday Million attracted 8,523 players to smash the $1.5million guarantee and create a prize pool of $1,704,600 which saw the top 1,260 players finish in the money. As usual many Team PokerStars Pro’s participated in the tournament with several of them cashing: Jude “j.thaddeus” Ainsworth in 832nd place, Juan Manuel “JUANPASTOR” Pastor in 791st, Sebastian “S.Ruthenberg” Ruthenberg in 639th, Dusty “Leatherass9” Schmidt (also a DragTheBar.com instructor) in 413th, Matthias “mattidm” de Meulder in 388th, and Martha “marene” Herrera finishing best of the team in 343rd place.

As the final table began it was yadio who held the chip lead with 15.4 million chips and karasoulis was the short stack holding just 2.4 million chips. The short stack didn’t last for long though as he shoved all-in on the small blind holding J2 and was called by marado86 in the big blind with him holding J3 and the board of 3QQ sealed his fate and saw him eliminated in 9th place for a $13,210.65 payday.

By the time play got down to heads-up it was a battle between Zareta and marado86 (winner of a PokerStars Sunday Warm-Up event over the summer) with marado86 holding a significant chip advantage with 69.9 million chips to Zareta’s 19.2 million chips. However the tournament had yet another twist as Zareta doubled-up after marado86 moved all-in. Marado86 held 1010 whereas Zareta held QK and the board ran 5JK92 to give Zareta a Flush and the double-up.This was enough to make the players agree on the following deal:

With $30k being set aside for the winner.

A little while later marado86 pushed all-in holding 109 and was called by Zareta who held AQ to dominate his opponent. The flop came 689 and shockingly sent marado86 into the lead, however the A on the turn gave Zareta the lead again and the turn brought the 8 giving both players two pair but Zareta’s Aces and Eights were the better hand and sealed the victory for him earning him a payday of $230,513.93.