There may not have been many runners in the WPT Malta Main Event but a sensational climax saw Yorane Kerignard snatch victory in a dramatic fashion. 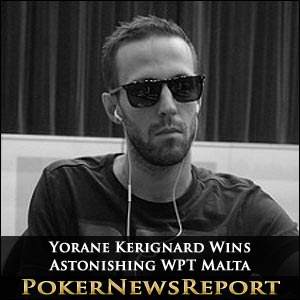 There may not have been many runners in the WPT Malta Main Event but a sensational climax saw Yorane Kerignard snatch victory in a dramatic fashion.

The final day of the WPT Malta Main Event at the Portomaso Casino had everything the climax of a poker tournament can offer. The drama of underdogs fighting a losing battle, a period of chess-like play which was so tense you could cut it with a knife and tears at the end of an emotional conclusion.

The six-handed final table had begun with Italian Jackson Genovesi ahead – as he mostly had been since the end of Day 1B. France´s Yorane Kerignard was the only other player sitting behind a chip stack of more than 1 million, with Finland´s Sampo Ryynanen lying in a handy third position.

The table was completed by birthday boy and WPT Venice winner Alessio Isaia, “Kitty” Hui Chen Kuo – the last woman to reach a WPT final table since Cecilia Pesaglini placed second in this event last year – and Zeljko Krizan, who had knocked out both Phil Hellmuth and Tony G in his first ever WPT event.

Jackson Genovesi and Alessio Isaia were the first players to tussle – Genovesi forcing Isaia out of a 270,000 chip pot and then Isaia doubling up against the Italian when his 8♣ 8♠ held against Genovesi´s A♥ K♦. Both players were also responsible for the first eliminations of the day – Genovesi (Q♥ Q♣) catching the Q♠ on the flop to eliminate Sampo Ryynanen (K♦ K♠), and Isaia (3♠ 3♦) busting the short-stacked Zeljko Krizan (A♦ 10♣) when hitting 3♥ on the turn.

Four hours passed before another elimination – during which time Jackson Genovesi pegged back Yorane Kerignard chip lead and Alessio Isaia took advantage of some loose play from Genovesi to play catch-up with the two leaders. At times the tension got to the players with Genovesi in one hand calling one of Isaia´s river bets with no better than Nine high, and at one point the players were grouped within 12 big blinds of each other.

At the beginning of Level 27 (blinds 25,000/50,000 – ante 5,000) and after having several pre-flop shoves unanswered, Alessio Isaia (7♦ 5♦) once again got all his chips into the middle of the table. This time both Genovesi and Kerignard both called and the two players checked down a board of K♠ J♦ 8♠ / K♥ / 8♥ – Genovesi turning over K♣ 7♥ to eliminate Isaia in third and take the chip advantage into the Heads-Up.

As the Heads-Up began, the antes were dropped from the 30,000/60,000 blinds and the levels reduced to thirty minutes. It took only one level for Yorane Kerignard to overturn a 630,000 chip deficit and claim victory – first forcing Genovesi out of two substantial pots to claim a narrow chip lead and then coming from behind in an explosive final hand.

Jackson Genovesi opened to 125,000 chips and called Yorane Kerignard´s raise to 260,000. The flop of 4♦ 2♠ 10♣ prompted a bet of 210,000 from Kerignard to which Genovesi responded by shoving the remainder of his chips into the middle.

Kerignard pondered his options. He had the Italian covered with more than a million chips left, but to lose the hand would have placed him in a 4:1 deficit. After more than two minutes Kerignard made the call and the two players revealed their hands.

I have him shrieked the Italian, pleading with the poker Gods Just blank it out. I don´t care what you do, just blank it out. However, Genovesi´s prayers were unheard as the 3♥ on the turn improved Kerignard´s options and then the A♦ on the river gave him victory.

Genovesi broke down in tears No, No, No, No! he sobbed, Why did it have to end like this? As he stormed away from the tournament area, the emotion of the moment also caught up with Kerignard who was overcome and had to be lead behind the scenes to compose himself before returning to collect the WPT winner´s trophy and cheque for €120,000.

After some sensation scenes at the Portomaso Casino in Malta, the final six placings and payouts looked like this:-