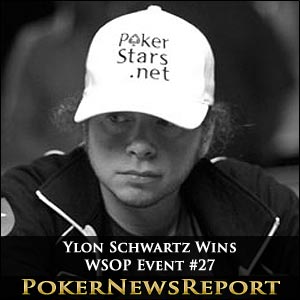 American Ylon Schwartz was super happy to take down the $1,500 buy-in H.O.R.S.E. event #27 at the World Series of Poker (WSOP) in Las Vegas.

The 42-year-old from New York outlasted 888 other entries to pick up the $267,081 first prize from a total prize pool of $1,200,150 after he, David Chiu and Stephen Chidwick returned for an unscheduled fourth day.

With the Day 3 field cut back from 18 players to just this trio of combatants, Schwartz ultimately defeated Vegas’ Chiu in their heads-up clash to secure his first gold bracelet at the Rio All-Suite Hotel & Casino.

I’ve been banging away, knocking at the door a bunch of times. Forever I was finishing at the second (to last table). They would call me ‘the teenager’ as I was finishing 13th, 14th, 15th, 16th. Then, finally, I got the fourth (in the 2008 main event), and then third and now I finally broke through. It’s an amazing feeling.”

That left Schwartz and four-time bracelet winner Chiu to play heads-up for the gold bracelet and, while Chiu was down on chips, he quickly pulled almost level before losing a huge pot during a round of Stud to pretty well end the clash.

The crucial hand saw Chiu with (x-x)/2♦ A♥ 6♦ 2♥/(x), while Schwartz held (x-x)/3♣ 4♠ 7♠ 7♥/(x). Schwartz called bets from Chiu on fourth and fifth street, before raising on sixth. Chiu then re-raised, only for Schwartz to bet again, prompting the former to call. Seventh street saw Schwartz make a cheeky check-raise, with Chiu calling – to be well beaten by his opponent’s quads from his K♥ 7♦ 7♣ hole cards.

Chiu was all but done now, having been reduced to only 200,000 chips, with the match concluded on the next hand as Texas-based Schwartz snatched the top spot.

Once Illinois’ Robert Rasmussen, who started the final table as chip leader, had exited in fourth place for $78,021, the three surviving players played on through to the end of the 10th level before agreeing to bag up and return for an extra day.