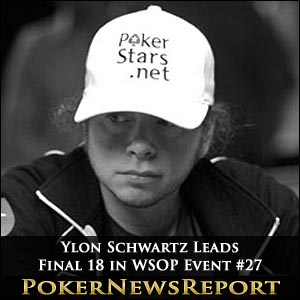 American Ylon Schwartz will take the chip lead into the final day of the $1,500 buy-in H.O.R.S.E. event #27 at the World Series of Poker (WSOP) in Las Vegas.

Certainly, Schwartz will start as the favourite to collect the $267,081 top prize and the gold bracelet after 147 players were sent to the rail on the second day, with the likes of David Sklansky, Marcel Luske, Christian Harder, Bryan Devonshire, Frank Kassela, Jason Mercier and Alex Bolotin falling short of the money.

In what was an exciting day, it seemed that the only player who was never really in danger of exiting was Schwartz, who eliminated one-time big stacks David Williams (23rd for $7,116) and Nick Kost (20th for $7,116) just before the chips were bagged up for the night.