Ylon Schwartz has been announced as the latest spokesman for online poker buy-in protection tool website Bubble Protection – where he will join fellow pros Will ‘The Thrill’ Failla and Chris Moorman. 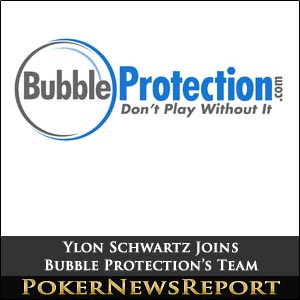 American Ylon Schwartz has been announced as the latest spokesman for online poker buy-in protection tool website Bubble Protection – where he will join fellow pros Will ‘The Thrill’ Failla and Chris Moorman.

The site went live last November and then followed this with a round of financing through a non-public offering in January.

The 41-year-old chess master said he was “proud to be associated” with Bubble Protection – which offers online poker players the chance to cover tournament buy-ins by paying a fee of about 12% on any buy-in that will hopefully ease concerns relating to bankroll losses – as he believes the company “has introduced the most innovative new poker product I’ve seen in many years”.

The 22-time WSOP in-the-money finisher added that the protection tool provides “a new wrinkle in how to play tournament poker” by providing players with a “significant strategic advantage during the most crucial stages of tournament play” – so allowing them to “accumulate chips” to ensure they are “in a powerful position for the end-game”.

Schwartz – whose last significant cash came back in 2009 at the 40th staging of the WSOP when he earned $112,967 for finishing third in event #47, a $2,500 buy-in Mixed Limit/No-Limit Hold’em tournament – continued by pointing out that using the tool should “result in a significant increase” in cashes, as well as “considerably more final tables”.

Additionally, the Brooklyn native – who has earned more than $4 million from WSOP and WSOP Circuit events – is eager for the US government to move forward with plans to legalise online poker in the wake of Black Friday last April 15 so that he can “put this strategic advantage to work for me”.

Meanwhile, Eugene Castro, the Las Vegas-based company’s creator and chief executive officer, said he is “pleased one of the most analytical people I know is passionate” about the business and is “willing to lend his name in support of our revolutionary bankroll management tool”.

Castro also emphasised that Schwartz – an original member of the November Nine – “has been extremely important in formulating the foundation” that underpins the event entry fee protection and indemnity tool as the pro’s “strategic analysis on how to effectively employ our product has helped define” Bubble Protection as a “money management tool” as well as a “weapon to be used to improve a player’s overall results”.

It must be highlighted that Bubble Protection is only available to non-American players for regularly planned tournaments at PokerStars, Party Poker and on the iPoker Network.

The scheme allows players to guarantee their buy-ins and fees if they finish just outside the money, while also providing immediate confirmation and payment of claims.

Will Failla and Chris Moorman Already Singed Up

In fact, between the trio, they have managed 50 WSOP cashes, with New York State’s Failla – last August’s WPT Legends of Poker champion in Los Angeles for $758,085 – having managed 15 of those in-the-money finishes.

It does appear that Bubble Protection are pushing on with their aim of ensuring that they remain the world’s premier internet poker tournament entry fee protection and insurance company with the inclusion of Schwartz as their newest spokesman.

Of course, any new developments will be covered here at Poker News Report, so make sure you bookmark us for ease of location.