Yevgeniy Timoshenko Comes From Behind for Aussie $100K Win 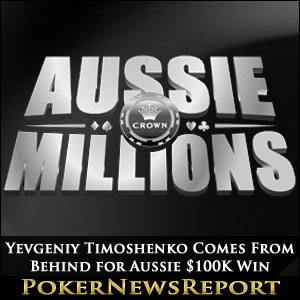 Ukrainian player Yevgeniy Timoshenko caused a major upset when winning the Aussie Millions $100K Challenge after starting the day as the shortest-stacked player.

Day 2 of the Aussie Millions $100K Challenge was as absorbing as Day 1 had been ludicrous. The day began with thirty-eight players, after nine late registrations and re-entries – including the sixth entry of Team PokerStars pro Isaac Haxton – bringing the total number of entries to seventy-six and creating a prize pool of Au$7,486,000 which would be shared among the top eight players.

As the cards went into the air, the players were starting Level 10 (blinds 3,000/6,000 – ante 500) with those who had just entered/re-entered having a starting stack of 100,000 and the event being led by Mike McDonald and Paul Newey. At the time Yevgeniy Timoshenko was the shortest stacked player with just 64,500 chips.

Incredibly Isaac Haxton´s sixth entry in the Aussie Millions $100K Challenge lasted just a couple of hands. Haxton bust out to the pocket Queens of Patrik Antonius shortly after sitting down at his table; and was quickly followed out the door by two other players who had entered/re-entered at the start of Day 2 – Scott Seiver (9♠ 7♠ < David Steicke´s A♥ A♦) and Gus Hansen (A♠ Q♥ < Jeff Rossiter´s A♣ 9♠).

Players who had fired multiple bullets on Day 2 continued to fall in quick succession and, within the first level, Christoph Vogelsang, Tobias Reinkemeier, Victor Blom, Justin Bonomo and Marvin Rettenmaier had all been sent to the rail as they tried (and failed) to spin up their opening 16 Big Blind stacks.

The tournament started to take shape despite there being no decrease in the rate of eliminations. Mike McDonald maintained his chip lead with the elimination of Max Lehmanski (7♠ 7♦ > A♣ K♣) and Ryan Reiss (Q♥ Q♣) scored the dual elimination of Tony Bloom (J♠ J♦) and Sorel Mizzi (8♠ 8♥) to join him at the top of the leaderboard.

Yevgeniy Timoshenko scored his first KO of the day when knocking out the previously crippled Ole Schemion A♣ K♦ > K♣ Q♥, and Fabian Quoss moved into contention with the fortunate elimination of Jason Mercier 8♠ 8♣ > A♦ 9♥ after Mercier had paired his Ace on the Turn, but four clubs on the board had completed Quoss´ flush draw.

Polk Up, Ivey Out after Getting a Lifeline

Phil Ivey had been reduced to short stack when failing to connect with the board with K♠ Q♣ against Richard Yong´s J♣ J♦, but was thrown a lifeline when his K♥ K♦ caught a set on the River to double up against Yong´s flopped set of Threes. Ivey then moved onto Fabian Quoss´ table and was bust almost immediately when getting all-in with A♣ 9♣ against Quoss´ A♥ Q♠ and Martin Jacobsen´s 7♠ 7♥. Jacobsen took the pot with a set of Sevens and Phil Ivey was out.

McDonald Gets Straightened Out but Fight Back

Having just lost a stack of chips to Martin Jacobsen, Fabian Quoss then made a huge dent in Mike McDonald´s stack – turning a straight with 10♥ 9♥ against McDonald´s J♠ 10♠ – to move into the chip lead; and then Mike McDonald was reduced to just two big blinds (48,000 chips) when doubling up Daniel Negreanu Q♦ 8♦ > Q♠ 9♥ after Negreanu flopped a straight.

McDonald tripled up almost immediately against Negreanu and Jacobsen, and then doubled-up against Richard Yong A♦ J♠ > 10♦ 9♦ before taking some chips back from Quoss to finish Level 15 with slightly more chips than he had started the day with. Yevgeniy Timoshenko had also quietly improved his position through the early levels and with the elimination of Paul Newey 9♣ 9♠ > A♣ K♣, Timoshenko had improved his stack to 650,000 chips.

Timoshenko move closer to the chip lead when Q♦ 7♠ flopped trip Sevens and improved to Quads on the Turn against Doug Polk, but Polk regained the chip advantage – and burst the money bubble – when eliminating Fabian Quoss in ninth place A♠ K♥ > 10♠ 10♥. Assured of a cash (but not necessarily a profit in Daniel Negreanu´s case) the eight remaining players all moved to a specially constructed studio for the televised final table.

After expressing his love of the shot-clock, Daniel Negreanu forfeited a stack of chips when he was timed out of a hand, and Martin Jacobsen was the first player to be eliminated from the final table when he moved all-in with A♣ 7♠ and failed to improve past Yevgeniy Timoshenko´s A♥ K♦.

McDonald Back Ahead – Seidel Sees off Steike

Mike McDonald took down a valuable pot against Doug Polk with K♠ 10♣ on a Queen-high board to regain the chip lead before Patrik Antonius put Daniel Negreanu into the danger zone by moving all-in with 3♥ 6♣ on a flop of 7♦ 3♦ Q♥, and his paired Three holding against Negreanu´s A♠ K♣.

Daniel Negreanu had bought into the Aussie Millions $100K Challenge five times, and need to finish in sixth place or higher to return a profit on the event. Ultimately he finished in sixth when running his A♥ 10♠ into Mike McDonald´s A♣ Q♣ and a Queen on the flop ended Negreanu´s participation in the event.

Eric Seidel´s participation was extended a little longer after getting an unlikely double-up against Patrik Antonius. Seidel moved all-in pre-flop with K♥ 9♠ and was dominated by Antonius´ A♦ J♦. The flop of K♦ J♥ 7♥ put Seidel ahead in the hand, but Antonius had plenty of outs – especially after the 10♥ on the Turn. However, Seidel´s Kings held and Antonius was now the short stack as the game entered level 20 (blinds 30,000/60,000 – ante 5,000).

Patrik Antonius run in the Aussie Millions $100K Challenge came to an end after trying to bluff Mike McDonald off a flop of 6♥ 5♠ 2♠. McDonald made the call with 7♠ 7♣ and Antonius missed his possible overpairs with J♣ 8♣ to be bust in fifth place.

A full level of play occurred before Eric Seidel eliminated Doug Polk in fourth place Q♥ Q♦ > A♥ 10♥, and during that time Seidel had doubled-up against Yevgeniy Timoshenko A♦ J♣ > 5♦ 5♠, while Timoshenko had doubled up A♠ A♣ > J♠ 10♠ against Mike McDonald to leave the three remaining players closely matched in pursuit of the Au$2 million first prize.

Seidel Unlucky to be Crippled – Even Unluckier to Bust

Mike McDonald moved into a clear chip advantage once again when taking a million chip pot from Yevgeniy Timoshenko with just Ace-high, and Timoshenko was lucky to stay in the tournament after getting all-in with 10♥ 10♣ against Erik Seidel´s A♣ Q♣, seeing Seidel pair both his overcards on the flop of A♥ Q♠ 2♣ and then being rescued by the 10♠ on the Turn.

Now reduced to 4 Big Blinds, Seidel committed his remaining chips to the pot in the next hand with J♦ 8♣. Timoshenko made the call with 8♠ 6♣, and Seidel watched in disbelief as the flop fell 8♥ 6♠ 3♦ to give Timoshenko two pairs. No Jack appeared on the Turn or River to save Seidel, and he was bust in third place – leaving Timoshenko (3.9 million chips) with a narrow chip advantage over Mike McDonald (3.7 million chips) going into the heads up.

Timoshenko Storms Ahead and Survives a Sweat to Win

Considering that Yevgeniy Timoshenko had started the day as the shortest stack and that Mike McDonald had been reduced to two Big Blinds earlier in the day, it was quite astonishing to see either of these players compete in the heads-up to the Aussie Millions $100K Challenge.

Yevgeniy Timoshenko took a substantial chips lead when he extracted three streets of value from McDonald with pocket Eights on a Seven-high board, but McDonald doubled-up 10♠ 8♠ > K♦ Q♦ (two flopped pairs over top pair) to extend the contest into Level 23 (blinds 60,000/120,000 – ante 10,000).

Timoshenko stayed ahead in the hand, but the 8♦ on the Turn brought possibilities of an open-ended straight for McDonald. The 3♥ on the River did not fall at either end of McDonald´s draw and Yevgeniy Timoshenko was the Aussie Millions $100K Challenge Champion.