Vietnam’s Yen Dang bagged her first bracelet after taking down the $1,000 buy-in Ladies No-Limit Hold’em Championship event #51 at the World Series of Poker. 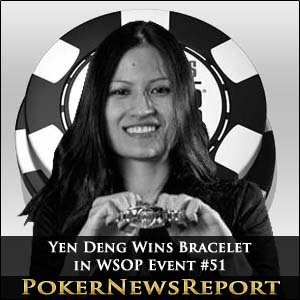 Vietnam’s Yen Dang bagged her first bracelet after taking down the $1,000 buy-in Ladies No-Limit Hold’em Championship event #51 at the World Series of Poker.

In what was a fantastic last day in the Rio All-Suite Hotel and Casino’s Pavilion Room, 25-year-old Dang – who had built up a good-sized stack on Day 2 – took the chip lead once the nine-handed final table was established to pocket the $170,587 first prize after outlasting 935 opponents in the Las Vegas venue.

It took just a dozen hands of heads-up play for former law student Dang to claim the title and leave heads-up rival Debbie Pechac, of Phoenix, disappointed but with $105,586 as runner-up – although this finish is an improvement on her 14th and 21st finishes in previous stagings of this event.

The final hand of the tournament saw Colorado-based Dang, on the button, open with a raise to 75,000, only for Pechac to re-raise to 200,000. Dang called and the flop came down K♠ Q♦ 8♣, prompting Pechac to shove all-in.

Dang took a few seconds, but made the call to reveal Q♠ 7♠ for a pair of queens, while Pechac showed J♥ 10♣ for an open-ended straight draw. The 4♥ turn was no good to Pechac, leaving her needing a nine or an ace. However, the river only brought the J♠ for Dang to be crowned champion.

The third and final day started with Pechac, Dang and Candida Ross-Powers holding the biggest stacks on the nine survivors from Day 2, while Rosemary Lawrence, Angela Moed and Jan Howard began with relatively short stacks.

But it was Sweden’s Anna Lundholm who hit the rail first in ninth place for $12,156 after she had been chopped back in a hand with Howard, of Texas, while Canada’s Freda Lawrence hit the rail in eighth for $15,559 when her K♠ Q♣ couldn’t improve against the A♦ J♣ of California’s Ross-Powers.

Another Canadian was eliminated soon after when Lesley Amos exited in seventh for $20,184 when he flopped two pair from her hole cards of Q♥ J♣ ran into Dang’s Broadway straight. Vegas-based Rae Rocco was ousted soon after, as well, in sixth for $26,536 after her pocket tens were overtaken by Pechac’s A♠ Q♠.

Pechac – who was the first entrant to break through the one million-chip mark – stayed ahead as Dang eliminated Sacramento’s Ross-Powers in fifth for $35,398 after the latter’s 8♦ 8♣ was beaten by the former’s A♦ K♠.

But Pechac was soon joined at the top of the leaderboard by Howard after the latter took down a big pot against the former, while a massive hand shortly after saw Dang take over as chip leader – again at the expense of Pechac.

Dang had moved all-in pre-flop with A♥ K♣ while Pechac tabled 7♦ 7♠, only for two aces to fall on the board to give the former over 1.5 million in chips as the latter collapsed to less than 200,000.

Play slowed down for a short while before short stack Moed, of Colombia, shoved all-in with pocket nines – only to run into the A♣ A♦ of Dang and exit in fourth place for $47,949.

Now three-handed, play slowed even more, with Howard’s stack being whittled down before she lost an all-in shove with A♣ 6♠ against the pocket nines of Dang to exit in third place for $66,061.

California’s Jana de la Cerra had held the chip lead during the late afternoon, but exited in 34th place for $4,305 when her flopped full house lost out to the quads of Dang! Della Jones – who also enjoyed some time among the leaders – exited in 33rd soon after for $4,305, while the field was chopped back to only 21 players by the time the dinner break arrived as Erica Schoenberg (28th for $4,305), Stacey Lynn (23rd for $5,155) and Leo Margets (22nd for $5,155) exited just as level 16 approached.