French poker player Xavier Carruggi took a late advantage in Day 2 on the PokerStars European Poker Tour Main Event in Barcelona – a remarkable achievement considering that the latest star of French poker started the day with only 38,000 chips and blinds at 500/1,000. 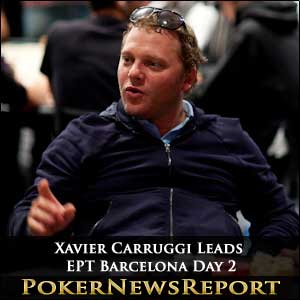 French poker player Xavier Carruggi took a late advantage in Day 2 on the PokerStars European Poker Tour Main Event in Barcelona – a remarkable achievement considering that the latest star of French poker started the day with only 38,000 chips and blinds at 500/1,000.

For most of the day, Carruggi had remained anonymous, but this new breakout player – who final tabled in the Everest ONE at Monte Carlo and the Summer €1,000 Deepstack in Paris earlier this year – stole the limelight at the end of what had been a fascinating day’s poker.

Day 2 started with a flurry of eliminations. From 407 starters, the field was cut by a quarter within the first two levels, and only 141 remain heading into Day 3. Amongst them will be USA poker star Annand “Victor” Ramdin, who already has two EPT cashes under his belt this year and who survived a day long battle with Sam El Sayed. Their ongoing verbal rivalry attracted much of the attention throughout the day until Ramdin´s A♥ A♠ shut the Swiss WPT Barcelona champion up and sent him to the rail – elevating the native New Yorker into a great position to make his third EPT cash of the year.

Several notable players made smooth transitions through the minefield of short-stacked shoves. Vanessa Selbst made early ground to up her stack to 300,000 when she bust Michael Schurpf’s pocket Aces with a set of Queens, and Chris Moorman is also running well – busting Ran Azor´s pocket Aces with 6♣ 2♣ (turn 2♠ river 2♥). Overnight chip leader from Day 1B, Guilluame Darcourt, is also still in contention, having bust out Dan Cates on his way to bagging 380,100 chips for the night, but lagging behind Day 1A king of the count, Martin Schleich, who ground his way up to 453,400 chips.

With 141 players remaining in the EPT Barcelona Main Event, and 120 of those cashing, the action today may be a little more subdued. Other players in reach of an EPT cash include ex-pat restaurant critic Nigel Goldman of the Marbella Mob, PokerStars pro players Andre Akkari and Eugene Katchalov, UKIPT winner Sam Razavi and an ex-tennis player by the name of Boris Becker.

… and Those on the Beach