More than 30 companies have now submitted applications to operate an online poker site in Nevada, with Wynn Resorts being the latest to join the growing list. 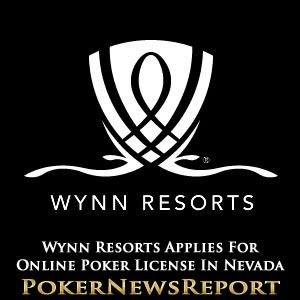 More than 30 companies have now submitted applications to operate an online poker site in Nevada, with Wynn Resorts being the latest to join the growing list.

If you’ll remember correctly, Wynn was considering entering the online poker market over one year ago and had a partnership agreement in place with PokerStars prior to Black Friday, but the U.S. Department of Justice (DoJ) threw a wrench into those plans by indicting and seizing the domain of the world’s top poker site, along with Full Tilt and Absolute Poker. Wynn is now reportedly in serious discussions with Zynga, the Facebook social gaming highflyer, to bring real money play to Silver State residents. With Zynga having over 30 million active monthly users playing free-play Zynga Poker, Wynn apparently has their eye on the global marketplace following interstate and worldwide expansion that is expected to occur after intrastate online poker is solidly entrenched in Nevada.

Other major Las Vegas casino companies, such as MGM Resorts International and Caesars Entertainment, have already applied for Internet poker licenses in the Silver State, as well as having forged partnership agreements with existing [geolink href=”https://www.pokernewsreport.com/online-poker-rooms”]poker sites[/geolink] that will bring technological expertise to the business arrangement.

Nevada continues making progress in their quest to become the first state to offer online poker. Last week, Bally Technologies, International Game Technology and William Hill received recommendations for approval of poker licenses from the Nevada Gaming Control Board. The next step in the process will be for the Nevada Gaming Commission to also scrutinize the applicants beginning June 21. Meanwhile, the Nevada Gaming Policy Committee will meet June 14 to discuss online poker fee structures and license requirements for those applicants who do pass the muster and obtain licensing.

While other states have yet to pass legislation approving online poker, all systems are go for Nevada. The latest timetable offered by Nevada gaming officials on when the first sites could be up and running is late December. Many industry insiders believe early 2013 seems a more realistic probability at this point.