Leonardo Fernandez and Veronica Dabul, poker pros from Argentina who both at one time represented Team PokerStars, are the subject of a lawsuit filed by Wynn Las Vegas for allegedly cheating at the craps table, pocketing approximately $700,000. 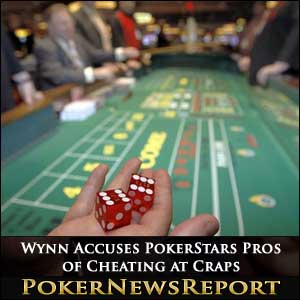 Leonardo Fernandez and Veronica Dabul, poker pros from Argentina who both at one time represented Team PokerStars, are the subject of a lawsuit filed by Wynn Las Vegas for allegedly cheating at the craps table, pocketing approximately $700,000.

The pair are accused of working with other dice players to pull off a ruse known as scooting or dice sliding, which consists of throwing or sliding the dice in such a way that enables the dice, or at least one of the die, to land face up with a favorable number for the player. Dice sliding cases are relatively rare because of the difficult nature of the scheme.

It’s not a common form of cheating because it involves a considerable amount of skill and practice, said Jerry Markling, enforcement chief for the Nevada Gaming Control Board.

Craps experts believe that when dice sliding is attempted, the shooter’s objective is to slide one die so that it lands face up as a six. Rolling two sixes, or boxcars, is good for a 30-1 payout. Making sure that at least one of the rolled die is a six increases the odds for a large payout, even if the other die is rolled randomly. Even if boxcars is not the result of the thrown dice, by successfully sliding a six, the dice roll is guaranteed to not be below seven, allowing dice sliders to place wagers on numbers higher than seven, also increasing the odds of payouts.

What scooting does is change the expected value of a bet from negative to positive, said Anthony Lucas, a University of Nevada, Las Vegas gaming professor.

A legal dice roll typically requires that the dice are tossed in the air in such a way that the dice bounce and also rebound off of the back wall of the craps table. In an effective dice slide, experts believe that the craps dealer or boxman is often distracted and fails to see the scooting of the die. If a craps dealer happens to see the dice thrown in a manner not conforming to a legal roll, he is required to call a “no roll” and the shooter must throw the dice again.

Leonardo Fernandez, from Buenos Aires, is currently listed on the PokerStars website as a Team PokerStars pro. The former semi-professional chess player finished 257th in the 2008 World Series of Poker Main Event, taking home $35,383. His biggest payday was in January of this year, earning $554,924 for 2nd place in the PCA $25,000 High Roller tournament.

Veronica Dabul, no longer listed on the PokerStars website as a sponsored pro, landed 22 places ahead of Fernandez at 235th in the 2008 WSOP Main Event, pocketing the same amount of $35,383. She also bested 161 players to win the Shark Conservation Poker Tournament in Costa Rica in 2009. Dabul has won nearly $200,000 in her poker-playing career.

Wynn casino, after reviewing tapes of the alleged dice sliding, accuse the Argentine nationals of cheating over a month-long period ending with the pair being arrested by the gaming board on July 18. The couple didn’t always play at the same time and Fernandez never wagered on his own dice slides. The lawsuit claims that the gambit consisted of using different teams of players at different tables.

Some industry observers believe that dice sliding is so difficult to accomplish that its almost unfathomable that anyone could be successful at it over such a long period without being discovered sooner.

Dice sliding is so obvious that it is easy to stop, said Alan Mendelson, a former TV reporter in Los Angeles familiar with gaming issues. It makes no sense they could get away with that much money unless they had inside help.

Although the poker pros were arrested and Dabul spent two days in jail before her release, the district attorney’s office has not filed criminal charges against either player and the casino’s allegations are a civil matter at this time.