Steve Wynn and Wynn Resorts have backed out of their proposal to build a casino in downtown Philadelphia. 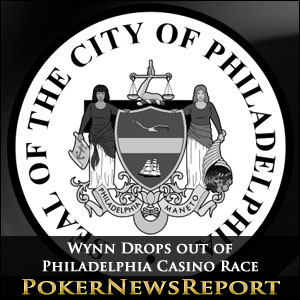 Steve Wynn and Wynn Resorts have backed out of their proposal to build a casino in downtown Philadelphia.

In a statement released on Monday, the Wynn Resorts Board of Directors announced that at the present time, it will be pursuing business opportunities elsewhere. When asked to elaborate, the Board indicated that it took a host of factors into consideration, which included Philly’s potential revenue market and New York’s recent entry into the gambling world.

In other news, last week voters in New York approved the construction of seven Las Vegas-style casinos. Applicants will be permitted to solicit bids in early 2014, and decisions regarding casino locations will likely take place in about a year. Unfortunately for those who live in Manhattan and its outlying suburbs, casinos cannot be built in or around New York City for at least another seven years.

Wynn’s change of heart comes as something of a surprise as only a short time ago, it referred to the opportunity to build a casino in Philadelphia as delicious. Philly is officially home to one casino, the SugarHouse Casino on the Delaware River, but the increasingly popular Parx Casino resides just minutes from the city. Harrah’s Chester Casino is also located just outside of Philly.

With Wynn’s departure five other firms are left to vie for the opportunity to build the casino. Shockingly, Pennsylvania currently houses the second most profitable in the United States, only Nevada fares better.

For the longest time, New Jersey held a stranglehold over second place, but Atlantic City has suffered an extreme economic windfall since 2006. The Garden State’s gambling haven hopes to revitalize AC through the introduction of online gaming, which is poised to go live on November 26th.

The other companies still in the hunt for Philadelphia’s new gambling arena include: Tower Entertainment, Market East Associates, PHL Local gaming, PA Gaming Ventures and Stadium Casino. Pennsylvania currently houses 11 commercial casinos, with another currently under construction. Further expansion is expected down the road, although the word is still out on whether Pennsylvania will incorporate online gambling into its long-term plans.

Wynn is likely to focus the majority of its efforts on its partnership with Caesars and its presence in Macau. One of the world’s top gambling locales, Macau brings in approximately $40 billion annually from gambling revenue.