The World Series of Poker Europe has started in Cannes for the first time since its move from London, and already the players at the series are raving about the facilities, the casino, the hotels and even the view! 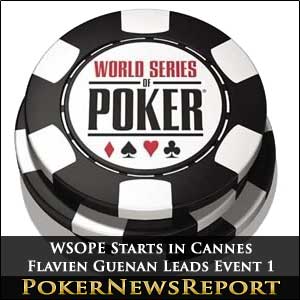 The World Series of Poker Europe has started in Cannes for the first time since its move from London, and already the players at the series are raving about the facilities, the casino, the hotels and even the view!

7 WSOP Bracelets, a Ladies Event and crowing rights in the Caesar Cup are up for grabs in a two-week program which encompasses 59 events – the results of which will go a long way to deciding the WSOP Player of the Year.

Attendance in the First Event is Up

It was felt that the recently concluded EPT London was negatively affected by the non-participation of US poker players who would have normally qualified online and flown over from the States to compete. However, the entry for the first bracelet event of the series – the €2,680 NL Hold´em 6-Max three day tournament – is up by almost 50% from when the series was staged in London. Looking through the entry list, there are not as many French or Spanish participants as you might imagine there would be, and a high proportion of players have made the journey from Canada (formerly known as the USA, since a lot of US players moved over there).

Having said that there is no great French participation in the first event, it is a local who leads the way at the end of Day 1. Flavien Guenan holds a narrow advantage in the NL Hold´em 6 Max event, ahead of compatriot Benjamin Pollak and Italian Antonio Venneri. A quality international field is stacked up behind the three leaders, which includes Vanessa Selbst, Phil Hellmuth and Joe Ebanks, as well as UK poker players recently arrived from the EPT London – Martins Adeniya, James Mitchell and James Bord.

Looking Ahead to the Weekend

Saturday sees the start of the second bracelet event – the €1,090 NL Hold´em Championship – with a huge field expected to compete. A further nine non-bracelet and satellite tournaments also take place during the course of the weekend, which will also see the conclusion of the NL Hold´em 6 Max Championship on Sunday.  The €10,400 buy-in Main Event does not start until Saturday 15th October and many of the events throughout next week are feeders into the feature tournament. You can see the full WSOPE schedule of events here.

World Series of Poker Player of the Year

Each bracelet event at the WSOP Europe awards valuable points in the race for World Series of Poker Player of the Year. Currently Phil Hellmuth leads the way after his three second-placed finishes in Las Vegas throughout June and July. However, if he fails to cash in any of the Cannes events, there are plenty of quality players queued up behind him looking to capture the title of Player of the Year.