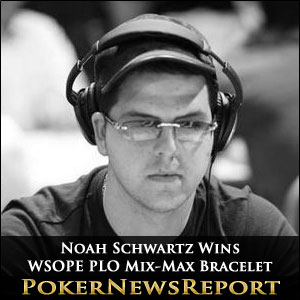 Event #6 of the World Series of Poker Europe was a Mix-Max tournament – in which Day 1 was played nine-handed, Day 2 was played six-handed, and the final four players returned on Day 3 to play heads-up (with their carried forward chip stacks) until a winner is determined.

For the first time in a WSOPE bracelet event the tournament was played using the Pot Limit Omaha format and, despite the buy-in of €3,250, the tournament attracted 127 players and created a prize pool of €373,380 which would be shared among the top sixteen players.

Lacay had been on a roll since the bubble had burst and took a significant chip advantage (667,500 -v- 112,500) into his heads-up semi-final against Vitaly Lunkin; while the second semi-final would be contested between Jyri Merivirta (183,500 chips) and Noah Schwartz (179,000 chips).

When play resumed on Day 3 of the WSOPE Event #6, just a few minutes of Level 16 remained before the blinds jumped up to 2,500/5,000. With such a big chip advantage, Ludovic Lacay was expected to make light work of Vitaly Lunkin, but the Russian got an early double up when his J♦ 7♠ 5♣ 5♥ flopped a better two pair than his opponent – which then held after Lunkin´s shove and Lacay´s call.

The second semi-final promised to be much closer with only one big blind separating the player´s chip stacks when the cards were in the air. However, Noah Schwartz quickly reduced his Finnish opponent to 60,000 chips with some aggressive post-flop betting which forced Merivirta to fold his cards in big pots.

Two pivotal hands put Noah Schwartz firmly in control of the WSOPE PLO Mix Max tournament. In the first Schwartz (Q♦ 5♣ 3♦ 2♦) rivered a straight to capture a 350,000 chip pot and, in the second, a post-river shove into a pot already containing 700,000 chips forced a fold out of Lacay and reduce the former chip leader to less than 100,000 chips.

Victory in a few minor pots enabled Ludovic Lacay to get competitive again, but in hand 62 it was all over. Lacay (8♦ Q♦ 5♣ 6♠) raised to 100,000 chips on a board of 5♦ 6♣ K♠ after flopping two pairs. Noah Schwartz (K♠ A♣ 8♥ 7♦ – for top pair and an open-ended straight draw) responded by shoving all-in and Lacay made the call for the last of his chips. The Turn of A♠ and River of 3♦ gave Noah Schwartz a better two pair and victory in the WSOPE PLO Mix Max Event #6.

It has been a good twelve months for Noah Schwartz in major live poker events. His victory in the WSOPE PLO Mix Max event followed a third place in the NL Hold´em equivalent three days ago, a second place finish in the WSOP Pot Limit Omaha Event #22 in June, a final table appearance at the EPT Monte Carlo Main Event and victory in the WPT Jacksonville Main Event last fall. However, he described winning his first WSOP bracelet as “surreal” in the post-game interview, and more important than the €104,580 first prize.