WSOPE on the (Risky) Move to Paris

The WSOPE has announced a change of venue for next year´s “premier” European poker tournament, but is it going to backfire and kill the series? 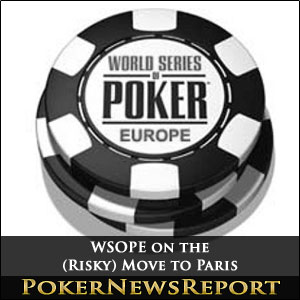 The WSOPE has announced a change of venue for next year´s “premier” European poker tournament, but is it going to backfire and kill the series?

The World Series of Poker Europe will have a new home for 2013. It is “au revoir” to Cannes and “bonjour” to Paris, where next year´s tournaments will be played at the Casino Barrière Enghien-les-Bains from October 11-24. Seven bracelet events will remain on the schedule with the Main Event having a €10,000 buy-in.

In the announcement, WSOP Executive Director Ty Stewart commented that Part of our vision for WSOP Europe is to mix poker and pleasure – and introduce players to some of the most exciting destinations in Europe.  He added this location promises to be the most comfortable and conducive set up for poker players in the WSOPE’s seven-year history, but who is this move really for – the WSOPE or the players?

Made for Television Venue

The move to a casino 15Km outside of Paris may well do wonders for the corporate profile of the WSOPE and distance itself from the Partouche family.  The venue includes the number one spa in the Paris area, two hotels and a 500-seat theatre in which the organisers plan to host and televise the final tables of each event.

The casino´s facilities will also certainly appeal to the multi-millionaires of the poker world, but Stewart´s hopes of expect[ing] to be back in record-setting mode in 2013 could be thwarted by the fact that whereas players who qualify into the primary events can “rough it” in Cannes, there is no way to live cheaply for two weeks in Paris.

Not a Made for Players Venue

Shepherding thousands of players into an over-priced resort in a suburb of Paris in October – rather than stay in the warm Mediterranean climate of the Cote d´Azur, within easy reach of San Remo (for the EPT) and in an area where there is a choice of quality hotels and casinos – and excluding many would-be WSOPE qualifiers from attending might not be the only issue for Stewart to deal with.

The area around Enghien-les-Bains is one of the roughest slum areas in Paris, and the volume of cautionary tales that appear on the Internet may well deter many USA poker players from making the trip across the pond. With the potential that players will avoid making the trip to Paris because of the prices and location (and you cannot wear jeans or trainers in the casino complex), the WSOPE could see its worst year since the tournament series began.