The final leg of the Split Format NL Hold´em Championship will start today with 16 players entering the heads-up stage of the event after overcoming two days of full-table and 6-Max action. 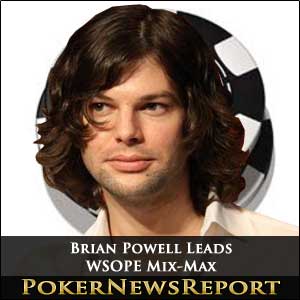 The final leg of the Split Format NL Hold´em Championship will start today with 16 players entering the heads-up stage of the event after overcoming two days of full-table and 6-Max action.

Unlike other heads-up competitions, players will enter the third stage of the “Mix-Max” tournament with the chip stacks they have acquired on previous days – so those who are towards the top of the leaderboard have a significant advantage against those with lesser chips stacks.

2010 WSOPE Main Event Final Tablist Brian Powell leads the way from a distinguished field which includes Erik Seidel, Jason Mercier and WPT Paris winner Matt Waxman, with many of his chips coming from the elimination of Tom Dwan who had started the day in third place. Powell had pushed Dwan to shove all-in with some aggressive pre-flop raising, but Dwan tabled the A♦ K♦ to leave Powell in trouble holding 7♦ 10♦. Fortunately for Powell, the flop of 9♦ A♣ 8♠ was followed by the J♠ on the turn to complete his straight and send Dwan to the rail.

Michael Mizrachi and Roger Hairabedian had kept Powell company at the top of the leaderboard for most of the day – Mizrachi busting Mattias Bergstrom when hitting a set of Tens, and Hairabedian playing his normal percentage game to pick up plenty of uncontested pots. Towards the end of the day Erik Seidel and Jason Mercier chipped up well to improve their positions, and Jonathon Aguiar – who on Wednesday tweeted that his Day 1 table was the toughest he had ever played against in seven years – was eventually the bubble boy, his pocket J♦ J♣ being no match for Kent Lundmark´s A♥ A♣.

From Here to the Bracelet

With each of the players now assured of €26,831, the heads-up stage of the “Mix-Max” is played over four knockout rounds today and tomorrow. The remaining 16 players will be reduced to eight, and then four, in today´s action and tomorrow the semis and final will both take place. The winner of the Championship will receive €336,008 in addition to the WSOPE bracelet from a total prize pool of €1,200,000. The contenders for this fantastic prize are as follow:-