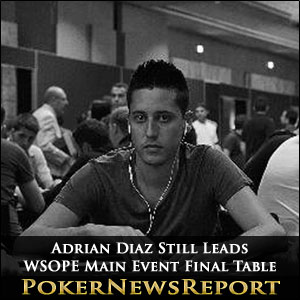 Adrian Diaz admitted at the close of the WSOPE Main Event Day 4 yesterday that it had been his best day for “runneado” ever. He announced on Twitter that he was “running sooo hot” and begged the poker gods to allow his run to continue for one more day.

Diaz faces an anxious wait to see if his prayers will be answered, as the climax of the WSOPE Main Event will not be played until Friday in order that the High Rollers can have their moment of glory in front of the TV cameras today.

Going into Day 4 of the WSOPE Main Event with the chip lead, Adrian Diaz – who stated in Tuesday that he had enjoyed several lucky seat draws – found himself in the same table as WSOP bracelet winner Fabrice Soulier, PokerStars PCA event winner Shannon Shorr, WPT Legends of Poker winner Jordan Christos and runner up in this week´s WSOPE Mix Max PLO Event Ludovic Lacay, who also had position on him.

However, two of his most dangerous opponents were quickly eliminated, as Diaz found an Ace on the Flop to bust Ludovic Lacay out of the WSOPE Main Event in twenty-fourth place A♥ Q♦ > K♦ K♣, and followed that up with busting Jordan Christos out on twenty-third A♥ A♦ > J♥ 9♠ on a Jack-high flop. Diaz then bluffed Fabrice Soulier out of a valuable pot with just 3♦ 4♦ and, when the field had been reduced to 18 and the tables re-drawn, sent Jeremy Ausmus to the rail in sixteenth place after Diaz´ J♦ J♥ had hit a set on the Flop.

With players busting from the WSOPE Main Event quicker than expected, the decision was made to continue play until just six players remained in the tournament – a decision which worked particularly well for Adrian Diaz, who had extended his chip lead still further when busting Adrien Allain from the Main Event in thirteenth place J♥ J♣ > A♥ 9♦.

Had it not been for the decision to continue play until only six players remained, Diaz would have been unable to eliminate Shannon Shorr in eighth A♣ A♦ > K♣ K♦ and Andrei Konopelko in seventh A♦ 2♣ > J♦ 9♥ to take 3,781,000 chips to Friday´s six-handed final table – a lead of 71 Big Blinds over his closest rival Dominik Nitsche.

Nitsche, Soulier and Spindler in Pursuit

Looking Ahead to Friday

The remaining two seats at the WSOPE Main Event final table will be taken by Ravi Raghavan (898,000 chips) and Jerome Huge (637,000 chips) who are far from out of the tournament – both having position on the chip leader. When the final table gets underway on Friday, the players will be one hand into Level 22 (blinds 10,000/20,000 – ante 3,000), so the two shortest-stacked players still have plenty of chips to work with.