A quality field assembled for the €10,400 “Mix-Max” WSOPE bracelet event with 125 players competing for the first € million plus pot of the week. 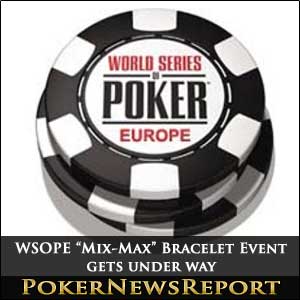 A quality field assembled for the €10,400 “Mix-Max” WSOPE bracelet event which started yesterday with 125 players competing for the first € million plus pot of the week.

More formally known by its title of NL Hold´em Split Format Championship, the event is played over four days at full tables, 6-Max tables and, eventually heads-up. The seventy-two players who survived Day 1 progress onto Day 2, where the event is played down to a final field of 16. Those 16 returned on Days 3 and 4 to contest the WSOPE bracelet and first prize of  €336,008 – each of whom being assured of a minimum cash of €26,831.

The Strength of the Field

The strength of the field was incredible. Whether it was due to the valuable prize, or there were some ego´s at stake, some of the tables on Day 1 would grace a final table anywhere else in the world. As well as tournament regulars Phil Hellmuth, James Bord, Daniel Negreanu et al; Sam Trickett, Konstantin Uspenskiy and bracelet winner Steve Billirakis joined the event as they were knocked out of the Pot Limit Omaha Championship (or won in the case of Billirakis).

The Hardest Day 1 Tables Ever Seen

Jonathon Aguiar – who has been competing in WSOP, EPT, NAPT and WPT events for seven years -tweeted that his table (which consisted of Justin Bonomo, Isaac Haxton, Matt Giannetti, David Vamplew and James Akenhead) was by far the toughest table he had ever played. However next to his was possibly the hardest table ever seen, comprising of Tony G, James Bord, Carlos Mortensen, Andrew Robl, Bruno Fitoussi, Eric Seidel, Sam Stein, Michael Mizrachi and David Benyamine – who between them had 14 WSOP bracelets and nearly $60 million in combined career tournament winnings!

Three chip leaders rose to the head of affairs during the course of the day. The first was Michael Mizrachi, who at one point had nearly double the stack of his competitors after taking substantial uncontested pots against Sam Trickett and Sam Stein. However, it looked as if the overnight chip leader was going to be Tom Dwan after his hand of 3♥ 2♣ eliminated two players when catching a straight on the turn, until Dennis Bejedal bettered Joel Nordkvist´s full house Deuces over Aces with his own Tens over Deuces.

Michael Mizrachi pulled in a couple of late pots to regain second position from Tom Dwan, but going into the 6-Max section of the tournament Dennis Bejedal held a handsome advantage.