The WSOPC Tunica Main Event has come to an end, after taking 7 hours for the final table to finish with an eventual winner, with Sam Barnhart claiming victory. The player from Little Rock, Arkansas, managed to… 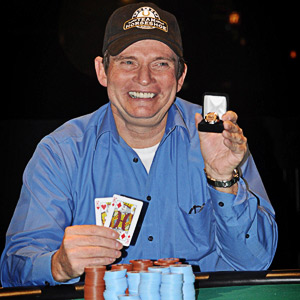 The WSOPC Tunica Main Event has come to an end, after taking 7 hours for the final table to finish with an eventual winner, with Sam Barnhart claiming victory. The player from Little Rock, Arkansas, managed to outlast 480 players to be crowned champion.

This year saw a restructuring of the event, with the buy-in reduced to $1,600 buy-in, attracting a much bigger player pool, and larger prize pool of $698,400.

Kurt Jewell, a previous WSOPC Tunica Main Event champion, made the final table for a second time and was one of the favorites to take it down again. Instead, that honor went to Sam Barnhart.

Barnhart started the Main Event final table sixth in chips so he had his work cut out for him. Here were the chip stacks of the nine players left standing in the 2011 WSOPC Tunica Main Event.

John Holley, who was one of the short stacks at the final table, was the first player to get eliminated in 9th place, after calling for all his chips with pocket fours when Jewell moved all-in from the small blind with As-5s. The flop gave Jewell a flush draw on the flop and he hit his flush on the turn, which saw Holley take an early exit.

Kurt Jewell’s fortunes didn’t last long, however. After shoving all-in with As-6s he was called by Barnhart with Ad-Kd only to be dominated. Barnhart’s AK held up and Jewell was eliminated in 8th place.

Preston Derden, another one of the short stack players for much of the final day, was next to get eliminated in 7th place. He shoved all-in from UTG but ran into his opponent’s pocket aces.

Next to get eliminated was John Nguyen in 6th place, when his 44 didn’t hold up against Sam Barnhart’s AJ. It looked like it was going to be a good day for Nguyen, since he started the day with the leading chip stack. Unfortunately for him he lost a good chunk of his stack after losing a monster pot, and he couldn’t recover from this setback.

It seemed like everything was turning to gold for Barnhart at the final table. In another hand, he managed to pick up pocket aces against Marcos Palacios, who was eliminated in 5th place.

Brian Burney and Mary Harden were next to get eliminated a short while after, and the heads-up confrontation was between Sam Barnhart and Jesse White. Barnhart had about double the chip lead going into the heads-up play, with about 6 million chips.

Not long into the heads-up match to determine the winner of the WSOPC Tunica Main Event, White decided to put his tournament life on the line, when he 3bet shoved with Jc-10c, but Barnhart snap called with pocket kings.

The flop came down 7s-5h-4s, and unfortunately for White the turn and river card were of no help, and the massive pot was shipped to Sam Barnhart, bringing a conclusion to the tournament.

Barnhart was crowned the 2011 WSOPC Tunica Main Event champion, earning him $148,612 for his hard fought efforts.

Speaking of the World Series of Poker, the 2011 WSOP Schedule has been announced and several online poker sites have already began offering satellite tournaments for the Main Event!