Pius Heinz, this year’s champion of the World Series of Poker (WSOP) Main Event which concluded last week, will keep every penny of the $8,715,636 first place prize. 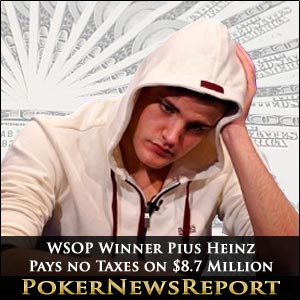 Pius Heinz, this year’s champion of the World Series of Poker (WSOP) Main Event which concluded last week, will keep every penny of the $8,715,636 first place prize.

The 22-year-old Pius Heinz from Germany, in addition to achieving poker immortality with his victory, will benefit from a US-German tax treaty that exempts German players from paying U.S. taxes on winnings from gambling. Had the treaty not been in place, Uncle Sam would have netted 30% of his prize, about $2.6 million.

In comparison, the 2008 WSOP Main Event winner, Denmark’s Peter Eastgate, was required to shell out a whopping 72.77% of his prize of $9.1 million to his home country, leaving the youngest champ in WSOP Main Event history with less than $3 million.

Jonathon Duhamel, who won the Main Event in 2010, forked over almost half of his $8.9 million to Canada’s taxman. Duhamel pocketed $4.6 million and was taxed $4.3 million, a rate of 48%. Not as bad as Eastgate’s rate of taxation, but still quite painful.

The United Kingdom also shares tax treaty exemption status with the U.S., which allowed ninth place finisher Sam Holden to keep all of his $782,115 in winnings. The other 2011 WSOP Main Event final table players were not so fortunate. Here is a listing that shows how much in taxes each November Nine player will be required to pay, according to taxabletalk.com.