World Series of Poker (WSOP) tournament director Jack Effel got the opening day of the 42nd annual poker extravaganza underway about 35 minutes late yesterday – but nothing could contain his enthusiasm for the most prestigious event on the calendar. 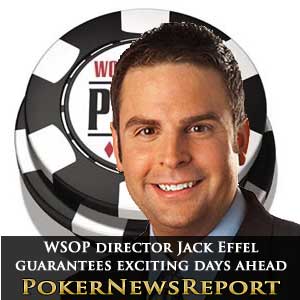 World Series of Poker (WSOP) tournament director Jack Effel got the opening day of the 42nd annual poker extravaganza underway about 35 minutes late yesterday – but nothing could contain his enthusiasm for the most prestigious event on the calendar.

Effel entered the Pavilion Room of the Rio All-Suite Hotel & Casino in Las Vegas slightly later than scheduled after a few problems needed ironing out – specifically that numerous players were supplied with matching seating assignments.

However, once staff had resolved those issues and players were correctly seated at other tables, Effel – in his sixth year in charge of the WSOP – gave the go-ahead for tournament No.1, the $500 Casino Employees no-limit hold’em event, to begin by allowing participants to make the time-honoured announcement of ‘shuffle up and deal’.

Effel then went on to discuss some of the new features making an appearance this year, including the debut of Badugi, as well as set stop times, smaller buy-ins for the weekends, the much-anticipated classic rematches and expanded coverage online and on television through ESPN.

Before we go on, it should be noted that Effel uses the word ‘exciting’ numerous times when discussing his hopes for this year’s WSOP, so don’t be surprised to see it crop up many times over the next few paragraphs.

Next on the agenda is the introduction of Badugi – a version of draw poker that is similar to triple draw – as part of a new 10-game mix event.

Effel said that “we also have the 10-game mix featuring, for the very first time at the World Series of Poker, Badugi – and that’s event No.29”.

He reckons that poker fans really “don’t want to miss that” as it will be “10 games, one event, six max (per table) – it’s going to be very exciting”.

The tournament director showed no signs of tempering his enthusiasm for all these new features as he then discussed the introduction of set stop times at a maximum 10 levels per day.

Effel reckons there are “some other great things happening this year”, but is especially happy to announce “hard stop times, so no player will have to play more than 10 levels on any given day for any bracelet event”.

That means “that on the third day, if you’re getting down to the wire and there are just a few players remaining, we will bring you back the next day” so as “everybody remains fresh” and participants “will win a bracelet during the most exciting time of the day, when there’s players around – when there’s excitement in the air”.

As for the rematches of classic heads-up battles from yesteryear, Effel believes there are “lots of great things happening with ESPN”, but is “very excited” about seeing Chris Moneymaker and Sam Farha “duke it out” in a repeat of the 2003 main event heads-up.

He also can’t wait to view “the Rounders rematch”, with “Johnny Chan versus Erik Seidel”, when he expects them to “play it out” once more in a repeat of their 1988 battle.

Then, “beyond that, we’re going to have Phil Hellmuth versus Chan” – and, again, Effel is “really excited about” that match-up from 1989.

Finally, Effel was pleased to report that ESPN has upped its coverage of the WSOP, more than doubling the hours to be broadcast by the cable television network.

He said that “there’s going to be a lot of great events televised this year”, while there will also be “a lot of broadband coverage for every single bracelet event”.

Most importantly for many poker fans, there will be “live coverage on ESPN all day long” during the main event – “starting from day three on through to the final table”.

Additionally, but without giving any details, Effel added that “we’re going to bring some expanded coverage, we’re going to show you some things we’ve never shown you before and we hope that you tune in to check it out”.

It took 78 hours to whittle down 7,319 competitors last year before 23-year-old Canadian Jonathan Duhamel was crowned the main event champion to pick up a staggering $8,944,138, while the total prize money paid out during the 41st staging of the event amounted to about $187 million.

There are 370 tournament tables distributed through the 58,000 sq ft Pavilion Room and the 38,000 sq ft Amazon Room, while last year’s event attracted a record-setting 72,966 competitors from 117 nations.

That’s just shy of a 20% increase on 2009’s 60,875 entrants, although it seems unlikely that number will be matched this year after the US Department of Justice (DoJ) froze many players’ poker sites accounts during April’s ‘Black Friday’.

It’s going to be a thrilling 50 days, that is guaranteed, as Effel would no doubt agree.

In fact, I’m going to leave the last word to the tournament director, who says he will “promise you that it’s going to be one poker show you’ve never seen before – and it will be exciting.”