The ten nominees for this year´s World Series of Poker Hall of Fame were announced yesterday – causing quite a stir about those who had not been included. 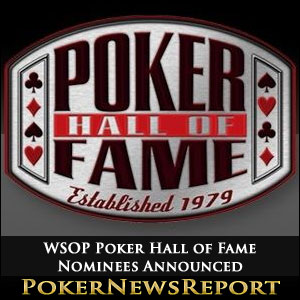 The ten nominees for this year´s World Series of Poker Hall of Fame were announced yesterday – causing quite a stir about those who had not been included.

Every year the World Series of Poker (WSOP) inducts one or two personalities from the world of poker into its Poker Hall of Fame during the November Nine celebrations. The process for choosing who gets in and who doesn´t is based on nominations made by members of the public – which are then assessed by the WSOP´s “Nominating Committee”.

Once the Nominating Committee has narrowed the list down to a Top Ten, ballot papers go out to existing Hall of Fame members and a twenty-person media panel, who give each nominee a ranking from 1 to 10. The ballot papers are returned to the Poker Hall of Fame “Governing Council”, who resolve any tie-breaks or errors and announce who will be inducted into the Hall of Fame this year.

The Criteria for Being Nominated

Not just anybody can be nominated by the public – poker players have to fulfil set criteria to be included in the original public voting list, and non-players that are nominated must have contributed to the overall growth and success of poker – demonstrating indelible positive and lasting results. The criteria for being nominated as a poker player includes:

Once all the votes have been cast by members of the public, the WSOP “Nominating Committee” has opportunity to add nominees if it is believed that a glaring omission has been made, or remove nominees if it is felt that person would not make a suitable Hall of Famer.

The public nomination process closed in August and, after a review by the WSOP´s “Nominating Committee”, the ten nominations to be included in the ballot to be inducted into the WSOP Poker Hall of Fame in 2014 are:

Chris Bjorin – London based Bjorin has recorded more than $5.5 million in career earnings. Originally from Sweden, Bjorin has two WSOP bracelets and has cashed 68 times in WSOP events.

Humberto Brenes – Brenes hails from Costa Rica and has been one of the most consistent performers at the WSOP for the past 25 years – his 82 WSOP cashes including nine in the WSOP Main Event.

Bruno Fitoussi – Fitoussi is widely acknowledged to have driven Texas Hold´em into France – introducing it to the Aviation Club in 1995 and presenting it as a mainstream sport on French TV.

Jennifer Harman – Harman is not only a notable poker player – having reached a WSOP final table on twelve occasions – but spends much of her time away from the tables raising money for charities.

Bob Hooks – 85-year-old Hooks has a poker career spanning six decades and was hired by Benny Binion to be the card room manager of the Horseshoe Casino when the first WSOP Main Event was played there in 1970. Hooks also finished second in the 1975 WSOP Main Event.

Mike Matusow – Matusow is a former poker dealer turned professional player who has four WSOP bracelets and lifetime earnings in excess of $9 million. Matusow is nicknamed “The Mouth” due to his reputation of being a tough talker at the tables.

Jack McClelland – McClelland worked his way from being a part-time dealer to being the tournament director for the WSOP during the early 80s. He then ran the Bellagio poker room until his retirement at the end of last year.

Daniel Negreanu – This is the first time that Negreanu has qualified for nomination, having turned 40 in July. He is the highest earning player of all-time, has won six WSOP bracelets and is the only two-time WSOP Player of the Year.

Huck Seed – Seed has a remarkable WSOP background which includes winning the WSOP Main Event in 1996, two final table appearances in the Poker Players Championship, victory in the 2010 Tournament of Champions and two further WSOP bracelets.

When the list of nominees was published, the reaction was fairly mixed. Daniel Negreanu rustled up a quick blog commenting on issues such as the age criteria, whether players should be nominated (or worse still inducted) just because they are a “nice guy” and what qualifies as standing the “test of time”.

Eric Siedel – himself a Poker Hall of Famer (2010) – took the unusual step (for him) of using social media to express his disappointment that players such as John Juanda, Carlos Mortensen, Bobby Hoff and Gus Hansen did not appear on the list of nominations. He commented:

It´s a flawed process that needs to be fixed. People respond to marketing, but HOF should reward achievement and quality of play

A more frequent Twitterer – Phil Hellmuth (inducted in 2007) – agreed with Seidel and said that the players should select the most deserving candidates – although leaking that his ballot paper would be ranking Jack McClelland and Ted Forrest highly, with Daniel Negreanu getting 5-out-of-10.

Ballot papers are due back by October 10th, and the two finalists receiving the most votes will be inducted during an enshrinement ceremony before the start of the WSOP Main Event Final Table on November 10th.