WSOP One Drop First Prize Could be $20 Million

Seth Palansky – Tournament Director for the World Series of Poker – has forecast that the WSOP One Drop first prize this year could be as high as $20 million. 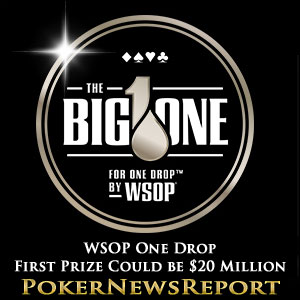 Seth Palansky – Tournament Director for the World Series of Poker – has forecast that the WSOP One Drop first prize this year could be as high as $20 million.

The WSOP´s “Big One for One Drop” tournament is one of the highlights of the forthcoming World Series of Poker and, in 2012 – the only other time the event has been staged – the tournament elevated Antonio Esfandiari to the status of poker´s richest man when he won the $18,346,673 first prize.

Looking ahead to this year´s event, Seth Palansky – writing on the WSOP website – revealed that the cap for entries into the $1 million buy-in event had been raised from 48 players to 56 players and that, should the maximum entries be received, the first prize for the event could be as high as $20 million.

Who is “Dropping In” to the One Drop?

Although the buy-in for the “Big One for One Drop” tournament is a staggering $1 million, this has not dissuaded seventeen players and three “anonymous businessmen” from confirming their entry. A further three seats are reserved for live satellites that will be hosted at the WSOP, the Aria and the Bellagio – meaning that only thirty-three seats remain.

Those who have already confirmed they will be playing on June 29th are:

Who Has Not Dropped By Yet?

Speculation over who will fill the remaining seats has started to heat up. Mike Sexton played in the 2012 event but has not yet confirmed his participation in 2014, nor has Gus Hansen – who won his seat into the inaugural “Big One for One Drop” through the WSOP´s mega-satellite along with Shaun Deeb, and who might have to take that route again considering the year he has had so far!

Two other big names are conspicuous by their absence from the list – Daniel Negreanu and Phil Hellmuth. Daniel Negreanu went on Twitter this morning to say that he intended on playing but has not secured the funds yet, while Phil Hellmuth also turned to Twitter to announce that if he was on “top form” he would play in the event, otherwise he would skip it.

Palansky Asks for 1% for One Drop

The Big Drop charity benefits by $111,111 for each player that enters the “Big One for One Drop” and potentially could gross more than $6.2 million if the event reaches its capacity. However, Seth Palansky is hoping that every player who cashes in the World Series of Poker feels able to donate 1% of their winnings to this worthwhile cause; which to date has changed the lives of more than 300,000 people in Nicaragua, Honduras, El Salvador, Haiti, India and Burkina Faso.

In 2013, the total prize money paid out at the World Series of Poker surpassed $190 million and, with WSOP.com being active in Nevada and New Jersey – and because of the One Drop tournament – this year the total amount of prize money paid out should exceed $250 million. 1% of that prize money could help an awful lot of people where fresh, running water is not taken for granted!