WSOP’s online poker site in New Jersey has announced that it is now the official Internet gaming partner of the NHL New York Rangers. 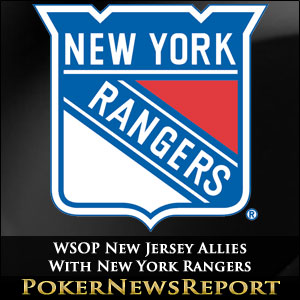 WSOP’s online poker site in New Jersey has announced that it is now the official Internet gaming partner of the NHL New York Rangers.

To celebrate the alliance, WSOP.com is promoting a sweepstakes in which four grand prizes totaling a combined $15,000 can be won. Also part of the giveaway are autographed Rangers jerseys, tickets to home games, and a Ranger legend coming to a lucky winner’s home to watch a New York vs. Montreal hockey game on April 12.

To be eligible, players on the WSOP.com New Jersey site need only to make a deposit until April 5 using the NYRANGERS promotional code. No further requirements are necessary to be a sweepstakes winner in the contest that is known as the Ultimate Hockey House Party on WSOP.com.

While WSOP.com enjoys the majority of the market share in Nevada’s regulated online poker market with about 55% of cash player action over Ultimate Poker, it trails in the regulated New Jersey market. The Party Borgata Network rules the roost in New Jersey, averaging 50 more cash players than the offering of WSOP.com.

A couple of months ago, one of the sites of the Party Borgata Network, nj.partypoker.com, entered into a partnership with both the NHL New Jersey Devils and the NBA Philadelphia 76ers. WSOP.com has followed suit in the realm of online gaming alliances with professional sports teams by hooking up with the Rangers.

New Jersey Senator Raymond Lesniak, who spearheaded the online gambling legislation that Governor Chris Christie signed in February of last year, has recently voiced his disapproval of some of the marketing efforts of the state’s Internet gambling sites. The outspoken senator didn’t comment on partnerships with pro sports teams in particular, saying instead that New Jersey online gaming marketing has been “amateurish” thus far, nj.com reported.

Poker players and casino gamblers tend to be avid sports fans. While partnerships between the gambling sites of casinos and sports teams may not actually be an overwhelming reason why some players sign up and play, awarding prizes of jerseys and tickets to hockey or basketball games certainly can’t hurt.