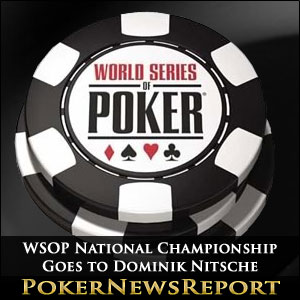 German Dominik Nitsche got his summer poker campaign off to the perfect start by winning the WSOP National Championship and his second career WSOP bracelet.

The WSOP National Championship is the climax of the 2013/14 WSOP Circuit Series, and is open to players who have won a WSOP ring in an circuit event, online qualifiers from WSOP.com and the top 100 players in the World Series of Poker´s “Player of the Year” leaderboard, who can each buy-in for $10,000.

The National Championship is an official WSOP bracelet event and, when the tournament started on Thursday, 126 players took their seats with the hope of collecting an iconic piece of jewellery in addition to the $352,800 first prize.

The money bubble burst late on Friday night when Matt Ashton eliminated Ruslan Dykshteyn in sixteenth place A♣ K♥ > A♦ J♥, and Ashton also held the chip lead when the six-handed final table got underway in a specially created arena on Atlantic City´s famous boardwalk.

When the conclusion to the WSOP National Championship started, there were 47 minutes left in Level 20 (blinds 6,000/12,000 – ante 2,000) and Andrew Robinson was the player most at risk. Robinson had already lost one orbit of blinds and antes by the time he chose to shove the last of his chips with 6♦ 8♥, but Athanasios Polychronopoulous called his bluff with A♥ 4♦ and, with the board missing both players, Robinson was eliminated in sixth place.

Leaders Flip-Flop as Doss and Bibb Hit the Rail

Tracy Doss´ enhanced chip stack did not last long; and Athanasios Polychronopoulous took over at the top of the chip counts when his rivered two-pair bested Doss´ top pair top kicker, before Dominik Nitsche eliminated Doss 10♠ 10♦ > A♦ J♥ to send the freeroll qualifier to the rail in fifth place.

Nitsche enjoyed a good sequence of hands as Level 24 started (blinds now 12,000/24,000 – ante 4,000) and he reduced Matt Ashton to less than 1 million chips when forcing him off another big pot, moved into the chip lead when his K♦ J♥ found a better pair on the board than Athanasios Polychronopoulous (A♠ Q♥) and then extended his chip lead when busting Chris Bibb in fourth place A♠ K♠ > A♥ 7♦.

Nitsche First into Heads-Up but Polychronopoulous Doubles Up to Lead

Matt Ashton´s chip stack continued to deteriorate and, after losing another stack of chips to Dominik Nitsche A♠ 9♠ > J♦ 9♥, Ashton was the penultimate player to leave the WSOP National Championship final table when his 3♣ 3♥ fell to the German´s A♠ J♦ rivered flush.

With the elimination of Matt Ashton, Dominik Nitsche took a substantial 2.575 million -v- 1.18 million chip advantage into the heads-up against Athanasios Polychronopoulous, but Polychronopoulous reversed the advantage with a K♥ 7♠ > Q♣ 8♣ double-up when Nitsche missed his flush draw after the flop of K♣ 10♣ 3♠.

Nitsche Comes from Behind to Win WSOP National Championship

The climax of the WSOP National Championship was over within six hands – Dominik Nitsche doubling back against Athanasios Polychronopoulous K♣ 7♦ > J♦ 10♣ before shoving all-in with A♥ 8♣ and getting a call from his opponent with A♦ 10♣.

When the cards were on their backs, Athanasios Polychronopoulous was a 66% favourite to double back into the chip lead, but the board paired Dominik Nitsche´s Eight on the flop of K♦ 8♠ 2♦, and the Turn (7♣) and River (4♠) failed to deliver the Ten that Polychronopoulous needed to stay alive in the tournament and Dominik Nitsche had added a second WSOP bracelet to the won he achieved in 2012 in a $1,000 buy-in WSOP donkament.

The Start of German WSOP Domination

The 2014 World Series of Poker promises to be a good one for German poker players. A strong line-up is anticipated at the Rio All Suites Hotel and Casino this week when the Series gets underway, and there are potentially ten players from Germany competing in the Big One for One Drop.

Dominik Nitsche has already started the ball rolling with victory in the WSOP National Championships, however the “official” payout figures (below) do not take into account that the prize money was chopped when three-handed play got underway according to a Tweet by Nitsche during his post-victory celebrations (maybe he was just trying to fool the IRS).