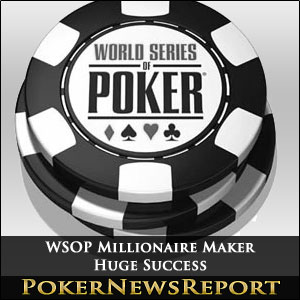 By the end of the 2nd flight of the tournament, dubbed Day 1B, even though the session began on the same day as 1A, the Millionaire Maker had become the largest non- Main Event poker tournament in history. A total of 6343 runners took to the felt for day one of the event, creating a prize pool of $8,563,050. The Millionaire Maker was slated as a three day event but the number of entries required that a fourth day be added. The record turnout forced the nightly scheduled Deep Stakes side tournaments that run during the WSOP to be rescheduled twice.

The $1 Million guaranteed for first place was easily met, with the winner’s payday set at over $1.19 Million (799 times their buy in). A six figure payday was guaranteed for all players reaching the final table, with the 9th place finisher taking home over $105K and the runner up pocketing almost $742K.

Lower buy in tournaments typically feature fast play and lots of action, and the Millionaire Maker was no exception. An average of five players was eliminated every minute and the WSOP staff broke a table every two minutes.

1481 players will enter day two. Ryan Welch will enter with the chip lead of 68K. While many of the big name pros were sent to the rail a lot of strong contenders make it through day one, including Phil Ivey (6K), Phil Helmuth (9K), John Hennigan (24K), Jake Cody (23K), Shawn Buchannan (41K) and Dennis Phillips (40K).