If you are planning on watching from the rail at the 2011 World Series of Poker (WSOP) Main Event final table on Sunday and Tuesday, you can expect to see an increase in technological advancements this year. 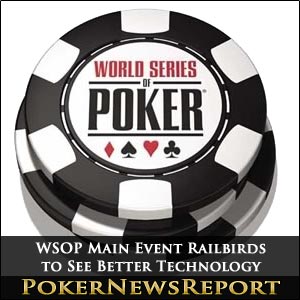 If you are planning on watching from the rail at the 2011 World Series of Poker (WSOP) Main Event final table on Sunday and Tuesday, you can expect to see an increase in technological advancements this year.

As railbirds watch the live final table action, an increase in the pace of play in comparison to past years should be easily recognizeable due to the near-live airing that allows for diminished production requirements such as tape changes and other TV downtime necessities.

“From an audience perspective, you’ll feel much more engaged because they should be dealing cards throughout,” said Seth Palansky, WSOP Communications Director. “We have breaks after every level and a dinner break on Sunday, but you won’t have as much of a lull as you’re used to having.”

Also featured this year for poker fans in attendance will be stat-tracker graphics that show players’ chip counts and bets. In past years, this valuable information was often beamed onto huge projection screens for all in the theater to see, but this year’s statistical info will be integrated more heavily. The WSOP also plans to show a video that will introduce the audience to each of the November Nine players.

The WSOP Main Event coverage in July was shown on a 30-minute delay. By slashing the time by 15 minutes for this year’s final table and showing it near-live at a 15-minute delay, WSOP organizers feel that they are pushing the envelope in live poker action. “We think the November Nine far eclipses anything else on the poker calendar in terms of being a spectacle and an event, so if there’s an event to air nearly live, this would be it,” Palansky said. “From an integrity standpoint, it has an equal effect on everyone. Everyone has access to the same information.”

Initially, WSOP organizers did not plan on airing the November Nine with the 15-minute delay. However, after receiving good ratings and mostly positive feedback last July, WSOP and ESPN officials decided to devote a great deal of time to the conclusion of the Main Event on a 15-minute delay.

“It definitely was not the plan,” Palansky said. “But coming off the summer and seeing what was transpiring with the taped shows, it was something that ESPN pushed for and we supported. Poker is a great mind game and a live environment really allows you to see that. There’s some criticism because the non-poker community doesn’t understand what’s going on since the hole cards aren’t shown until the end, so it can be off-putting to them. A poker aficionado, however, looks at it and plays along.”

The final table action will begin Sunday, Nov. 6 at 3:30 p.m. ET at Rio’s Penn and Teller Theater in Las Vegas. Cards will be in the air until the number of players is reduced to three. The three-handed finale will commence Tuesday, Nov. 8 at 9:00 p.m. ET until one player is crowned the champion.

Last year, the November Nine finale was paused for only one day with two players remaining. As to the reason for the change from two players to three this year, Palansky said, “The TV folks like to ensure that there will be some suspense or drama. ESPN has given us the window on their biggest network in primetime and they want to make sure there’s something to show. With three people, it changes things enough.”

In 2010, heads-up action between Jonathan Duhamel and John Racener lasted approximately 90 minutes. This year, Tuesday’s broadcast will most likely last longer than that with a trio of players still remaining. A smaller live crowd is also expected this year due to the near-live coverage that will allow many poker fans to see the world’s next poker champ from the comfort of their homes.

Some in the poker industry feel that with the current lack of poker sponsorship in the U.S. due to the fallout from Black Friday, many more near-live broadcasts are likely on the horizon. Palansky wouldn’t confirm or deny that. “It’s too soon to tell what the future of poker on TV will be,” Palansky said. “I don’t think live poker for any event at any time works, but for final tables, there’s an argument to be made. We’re doing the $1 million buy-in event at the 2012 WSOP and that seems like a pretty cool event that will only have a couple of tables. It might be a good candidate to air in a live format.”