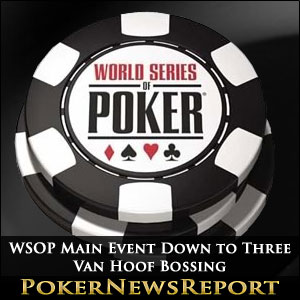 After a hiatus of nearly four months, the final table of the World Series of Poker was eagerly anticipated by fans of poker all over the world. The ESPN broadcasts of the Main Event action from July had concluded last week with the elimination of Luis Velador in tenth place, and now the scene was set for the November Nine.

Leading the pack was Dutch player Jorryt van Hoof – the only unsponsored player in the line-up due to Dutch poker regulations about advertising – while Mark Newhouse was making back-to-back final table appearances after his ninth place finish in last year´s Main Event. Between the two pace-setters was Felix Stephensen – a player with just $22,000 in live poker cashes prior to the WSOP Main Event, and there was plenty of interesting stories among the remaining contenders.

Fourth in chips at the start of play was Andoni Larrabe – the first Spanish born player to make a WSOP ME final table appearance since Carlos Mortensen in 2001 – while sitting in fifth place Dan Sindelar has been a regular on the Las Vegas circuit for more than a decade.

Sixth placed William Pappaconstantinou has won seven foosball world championships, seventh placed Will Tonking just hit a $50,000 score on WSOP.com in his home state of New Jersey, high-rolling eighth place Martin Jacobsen was the Day 1A chip leader and short-stack Bruno Politano brought half of Brazil with him to the Penn & Teller Theatre for support.

“Ninth is the Worst Place You Can Finish”

After Tweeting on Day 1 of the Main Event that “ninth is the worst place you can finish, that is exactly what happened to Mark Newhouse. After some nervous opening exchanges during which Jorryt van Hoof lost the chip lead and then won it back again, Mark Newhouse moved all-in on the board of 2♦ 4♣ J♥ / 4♥ / J♣ with 10♣ 10♥. Will Tonking hesitated for a minute before making the call with Q♦ Q♣ to send Newhouse to the rail for back-to-back ninth place finishes and $730,725 in prize money.

Tonking´s elimination of Newhouse moved him up into the chip lead, but as level 37 got underway (blinds now 300,000/600,000 – ante 75,000), Jorryt van Hoof stepped up the aggression and forced Andoni Larrabe out of a pot approaching 5 million chips to regain the chip advantage – the Spaniard´s chip stack dropping to 19.1 million, while van Hoof was the first player to hit 60 million in chips.

Bruno Politano´s large Brazilian support had not had much to cheer about during the opening exchanges. A handful of pre-flop raises had seen him ladder up to seventh place at one point, but a lack of decent cards handicapped his attempts to make any meaningful impression at the of the WSOP Main Event final table.

Just six hands later Dan Sindelar was to join Bruno Politano on the rail after four-bet shoving from under-the-gun with J♦ J♣. Jorryt van Hoof made the call with A♥ 3♥ and an Ace on the flop and two hearts gave the Dutchman a strong lead in the hand. The Turn (3♦) and River (9♠) failed to produce the solitary Jack Sindelar needed to stay alive in the Main Event, and he was bust in seventh place for $1,235,862.

As Jorryt van Hoof was extending his lead, William Pappaconstantinou (now conveniently referred to as “Billy Pappas” by the commentary team) found two double ups to reduce his from short-stack to live contender. In the first he spiked a pair of Kings on the river to best Martin Jacobson´s paired Q♦ 3♦, and three hands later his K♦ K♣ held against Andoni Larribe´s K♥ Q♥ to improve his chip stack from 6.4 million to 26 million in a matter of minutes.

Following the last of Billy Pappas´ double ups, Andoni Larrabe´s chip stack had fallen to fewer than 10 million chips. Those chips went into the middle when Larrabe moved all-in from the small blind after a van Hoof raise from middle position. Jorryt van Hoof was ahead as the hands were turned over (Larrabe J♣ 10♣ – van Hoof K♥ 5♥) and he paired his King on the flop to eliminate the Spaniard in sixth place for $1,622,080.

William Pappaconstantinou´s fantastic run in the WSOP Main Event finished in the very next hand, when – automatically all-in – his 7♣ 7♠ failed to improve past Jorryt van Hoof´s J♥ J♣. However the hand was significant for a second reason. Martin Jacobson had started the pre-flop betting with a 2.25 million bet. Felix Stephensen made it 5.5 million to play, and Jorryt van Hoof raised the action to 12 million. Both Jacobson and Stephenson got out of the way, meaning that van Hoof collected in excess of eight million chips in the hand. Pappas collected $2,143,174 for his fifth place finish.

Up to 86.5 million chips, Jorryt van Hoof continued to apply the pressure and took his chip stack past 100 million chips in a massive pot against Felix Stephensen. Stephensen had limped into the flop from the small blind with A♦ 5♠, and van Hoof checked (K♥ 3♣). Both players saw the flop of 8♦ 6♣ 3♦, after which Stephensen raised to 1.4 million and van Hoof flat-called. The K♦ on the Turn gave Stephensen nine outs to a nut flush and he raised the betting to 2.9 million chips, and then again to 5.75 million after the 9♠ on the River. Van Hoof flat-called both times and took the 24 million chip pot with his two pairs to move up to 102,575,000 chips.

Martin Jacobson´s good run at the final table continued with the elimination of Will Tonking in fourth place (for $2,848,833) – but he had to dodge a load of bullets in the process. Tonking (2♥ 2♣) had moved all-in from under-the-gun for his last 20 million chips and Martin Jacobson made the call with 10♥ 10♦. The flop of 4♣ 5♣ J♣ gave Will Tonking nine outs to make a winning flush, and although the 6♦ on the Turn was not one of them, it opened up the possibility of a gutshot draw with any Three. Unfortunately for Tonking the Q♠ blanked on the River and he was eliminated from the WSOP Main Event in fourth place.

Although down to three players, the tournament continued until the end of the level – at one point Martin Jacobson taking down eight out of ten hands uncontested to reduce the gap between himself and Jorryt van Hoof to less than 20 million chips. A shove by Jorryt van Hoof after a 6 million chip pre-flop three-bet by Felix Stephensen put a bit more space between van Hoof and his two opponents, but when play resumes tomorrow (with blinds of 600,000/1,200,000 – ante 200,000) any of the three remaining players could still become WSOP Main Event Champion of 2014.