WSOP Main Event Down To 1,753 Players after Day 2C

A total of 911 players were still holding chips after Day 2C action in the WSOP Main Event to combine with 842 survivors of Day 2AB. 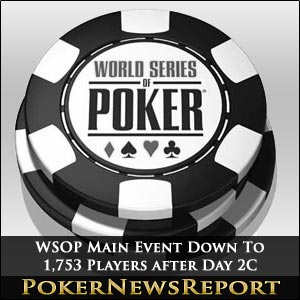 A total of 911 players were still holding chips after Day 2C action in the WSOP Main Event to combine with 842 survivors of Day 2AB.

The remaining 1,753 players will all compete together Thursday for the first time since the 43rd annual $10,000 buy-in Main Event began on Saturday. Michael Hack came out on top in Wednesday’s action with 457,000 chips after starting the day with 85,650. He sits in fourth place on the overall chip leader board, trailing Gaelle Baumann‘s chip total of 505,800, Mark Demirdjian at 499,990, and Shaun Deeb with 460,900, who all played the previous day. The leader from Day 1C, Randy Haddox, held the lead for almost six hours on Day 2C, but couldn’t maintain the pace near the end of the day and ended up bagging 407,300 in chips.

Almost 1,600 players were sent packing on Day 2C. Poker pros who won’t be returning for Day 3 include Doyle Brunson, Phil Ivey, Gus Hansen, Joe Cada and Michael Mizrachi. Brunson was eliminated when his two pair lost to a flopped set. Ivey entered the day’s action with only 22 big blinds. His small stack forced him to shove all-in early and he managed to do so as a favorite with a pair of deuces against his opponent’s A-10. But the concensus best all-around poker player in the world was sent to the rail when his heads-up rival in the hand flopped two pair.

Main Event action will continue Thursday at noon, Las Vegas time. Five levels are set to be played and the reduction of the field is expected to be about 1,000 players. If that holds true, the next 87 eliminations on Friday will allow the remaining 666 players to finish in-the-money.