Day 2a/2b of the WSOP Main Event is now over and Nick Schwarmann is the player with the chip lead, with Jason DeWitt not too far behind. 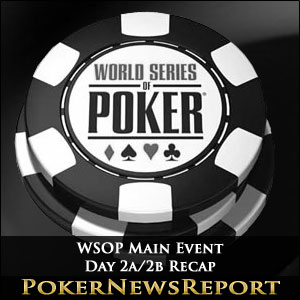 Day 2a/2b of the WSOP Main Event is now over and Nick Schwarmann is the player with the chip lead, with Jason DeWitt not too far behind.

Nick Schwarmann ended the day with 413,600 chips to his name and is the only player presently with a stack of more than 400,000. Jason DeWitt ended the second day of play with 382,900 chips, cemented his second place spot on the chip ladder. He is followed by Aage Ravn, who finished up with 370,900 to have the third highest stack at the end of the day.

2012 Main Event winner Greg Merson has also put himself in a good position to take out a second straight Main Event Gold Bracelet as he ended Day 2a/2b with a stack of 275,600. That was good enough for fifteenth on the list of players who made it to the end of the second day of play.

Merson’s stack was just under the 300,000 mark for much of the late stages of the day. He was nearing 290,000 at one point, but lost a few small hands towards the day’s end to finish up the still solid 275K stack.

Poker legend Doyle Brunson showed that age truly is no barrier when it comes to poker as the 79-year-old finished the day with 224,000 chips to his name. That puts Brunson 25th on the chip ladder of today’s players, putting him in a good spot for the next day of play.

Brunson won a big hand with K♦ J♥ after hitting a straight on a board that showed 10♦ 9♣ 2♣ Q♥ 9♥. The Godfather of Poker slow played his end to the end in a display that showed why he is a ten-time WSOP Gold Bracelet winner. That hand added 115,000 to Brunson’s stack, a great addition to his other chips.

The man responsible for poker’s mainstream popularity, 2003 Main Event winner Chris Moneymaker, was eliminated on Day 2. Moneymaker went all in with {Ax} {Jx} and was called by Ivan Mamuzic, who showed {Ax} {Ax}. The Aces held on the board and Moneymaker was knocked out on the tenth anniversary of his historic WSOP Main Event win.

Eyes are set to be on Schwarmann when Day 3 begins in two days. Schwarmann has partipcated in a number of WSOP events since 2010, and his best performance to date has been second place in the $2,500 No Limit 4 Handed event (#38) at his year’s WSOP.

Day 2c will be played tomorrow, as players on the last starting flight will attempt to join Day 2a/2b’s survivors in the third day of play.