A whopping 3,418 players bought in on the final day of eligibility for the WSOP Main Event, setting the record for the largest one-day field. 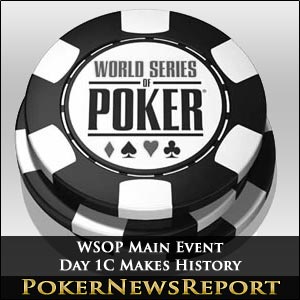 A whopping 3,418 players bought in on the final day of eligibility for the WSOP Main Event, setting the record for the largest one-day field.

The winner will pocket more than $8.5 million, while the cut-off for cashing is 666th place, which is guaranteed to almost double the ten grand entry fee by taking home $19,227. The chip leader from Day 1C is Randy Haddox, who will return for Day 2C on Wednesday with 188,275. He landed right in the middle of Day 1A and 1B chip leaders William John and and John Hoang, who bagged 266,700 and 180,000, respectively.

Exciting action on Monday saw Viktor “Isuldur1” Blom, in his first Main Event, six-bet a stack of 18,400 with A♠ K♥. His opponent moved all-in with K♣ K♠ and Blom called. A board of A♦ 9♣ 8♣ A♣ 7♠ gave Blom a set of bullets and 90,000 in chips. He finished the day with 110,225. Other notable pros who had a successful first day include Joe Cada (117,375), Sorel Mizzi (115,000) and Doyle Brunson (81,400). Brunson had originally said that he would sit out the Main Event this year due to feeling tired from some long days at the cash tables. But the ten-time gold bracelet winner had a last minute change of heart and took his rightful place at the table.

Also moving along to Day 2 action will be BIG ONE For ONE DROP winner Antonio Esfandiari, who accumulated 78,925 in chips. The Magician will be joined by Johnny Chan (82,300) and Joseph Cheong (84,775). As usual, this year’s Main Event is not short on Hollywood stars who have bought in to take their shot at poker immortality. Matt Affleck had a good day on the felt, totalling 91,300 in chips. Jason (George Costanza) Alexander also had a successful first day. He will return for Wednesday’s action with 49,550. No word on whether Alexander is doing the exact opposite of what his instincts tell him to do on the poker table, which worked very well for his Costanza character.

Some big name players who didn’t fare so well include Humberto Brenes and Jonathon Duhamel, who will both be watching the rest of the tourney from the rail. Joining them will be Chris Moneymaker. The 2003 Main Event champ took an early exit when his A♠ Q♦ lost to Marty Zabib’s K♦ 10♦ on a board of 7♦ 10♣ Q♠ J♣ 10♥.

Players who bagged chips on Days 1A and 1B will play Day 2 on Tuesday in separate rooms, while 1C survivors have a day off before resuming Wednesday.