The Main Event of the 2012 World Series of Poker is underway with Days 1A and 1B completed. 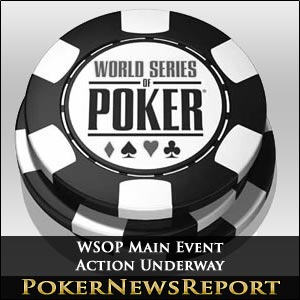 The Main Event of the 2012 World Series of Poker is underway with Days 1A and 1B completed.

Beginning on Saturday, July 7,  with 1,066 players vying for the most prestigious championship in poker, 657 players bagged their chips and will continue their pursuit of poker glory on Day 2 scheduled for Tuesday. William John, who never has cashed in any WSOP event, emerged as the Day 1A chip leader with a stack of 266,000. John’s lead over 1A competition is considerable, as nobody else who doled out the $10,000 buy-in managed to amass 200,000 chips. In past Main Event history, the early leader has ended up cashing 50% of the time.

A noted casualty of Day 1A is the man with more WSOP titles than any other player on the planet. Phil Hellmuth was denied a shot at his 13th gold bracelet when he shoved all-in after roughly six hours of play with A-J on a flop of A-10-3. Sweden’s Michael Tureniec had pocket 3’s in the hole and his set held up when the turn and river arrived as 2-7, forcing the Poker Brat to watch the rest of the tournament from the rail. Hellmuth expressed his displeasure over his rough day at the office via Twitter by tweeting, I’m out of Main Event! Feeling tortured. Feeling sick…

Last year’s Main Event champion, Pius Heinz, managed to double up when his suited J-4 of spades connected with three more spades on the flop. His opponent held the 8-7 of spades and lost with a smaller flush. In defending his title, Heinz is hoping to be the first champion to cash in the year following a victory since Peter Eastgate landed in 78th place in 2009 after beating the entire field in 2008. Heinz finished Day 1A with about 40,000 chips, 30% more than what all players start the tournament with.

Day 1B on Sunday, July 8, saw 2,114 players buy-in, making the running total of entrants 3,180 thus far. Players can still register for the final Day 1, which is Day 1C on Monday, up until the third blind level begins. Many industry observers believe there is a good chance that last year’s buy-in total of 6,865 will be eclipsed. As of this writing, 2,300 have already ponied up the ten grand entry fee.

Noteworthy eliminations on Day 1B include Carlos Mortensen, Tom Dwan, Scotty Nguyen, Bertrand Grospellier and Greg Raymer. The Fossilman won’t be duplicating his 2004 Main Event victory, as his A-K in the hole couldn’t match up on the board against the pocket Queens of his opponent. Successful players on Day 1B include Daniel Negreanu and Vanessa Selbst. KidPoker finished the day with 140,075 in chips, good for 9th place among Day 1B combatants.

Selbst was dealt pocket Aces on the day’s final hand and managed to double up when the bullets held up versus her opponent’s pocket Kings. That dramatic finish to the events of Day 1B landed her in third place for the day with a stack of 168,350. Other than that final hand, Selbst felt that she wasn’t in on very much action. I hit a couple big hands, but otherwise I didn’t play that many big pots she insisted. It was pretty much coasting through. Day 1B’s chip leader is John Hoang with 180,000.

Only two players from the final table of 2011’s Main Event have been in action so far in 2012–Martin Staszko and Pius Heinz. The seven remaining “November Nine” players will compete Monday on Day 1C. This year’s Main Event runs through July 16, when play will once again be halted with nine players remaining. The 2012 Main Event final table will reconvene in October to determine the champion.