World Series of Poker organisers must be scratching their heads after another bracelet event flopped miserably in terms of attendance. 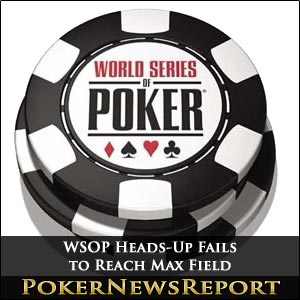 World Series of Poker organisers must be scratching their heads after another bracelet event flopped miserably in terms of attendance.

Just 317 players entered the Heads-Up NL Hold´em/PL Omaha Event #3 – allowing 61 players first round byes and meaning that a fifth of the field only had to win two heads-up games to cash in the tournament.

The disappointing turn-out follows a field almost half the anticipated size for Event #2 and a much smaller field than last year for the Casino employee´s tournament. A small glimmer of sunshine shone amidst the gloomy atmosphere when it was revealed that Event #4 – 7 Card Stud Hi/Lo – had managed to attract 14 more entries than last year´s equivalent, but this was still less than had participated in the tournament in 2010.

A Heads-Up on the Heads-Up

Despite the small field for the $3,000 buy-in Heads-Up event, it promised to be a cracker. Entries included Phil Ivey, Daniel Negreanu, Ben Lamb, Bertrand “ElKy” Grospellier, Jonathan Duhamel, Eugene Katchalov,  Jeffrey Lisandro, Jake Cody, Thomas Marchese and the Mizrachi brothers – none of whom brought their A-game to the tables and all busted out during the first three rounds.

Of those that are left, the most intriguing fourth round matches would appear to be last year´s Hold´em 6-Max bracelet winner Matt Jarvis against Guillaume Darcourt – the winner of whom could meet the victor of the Ryan Franklin –v- Annette Obrestad match. In the other half of the draw, Mike Sexton faces Justin Bonomo in round 4 (of 9) with the winner likely to meet bracelet winners Andy Frankenberger and Sam Stein on their route to the champion´s bracelet.

What Else is Going on at the WSOP?

In Event #2 – the $1,500 buy-in NL Hold´em donkament – Vanessa Selbst aims to be the first woman to win an open event at the World Series of Poker in four years (Vanessa actually was the last woman to win an open bracelet event). She leads the remaining thirty players who are scheduled to play deep into the night until only 9 remain awake. Currently she is unable to shake off Aylesbury´s J.P. Kelly – who is only 8 big blinds behind her – and Hungarian Andras Stumpf. A full report on this event will appear later.

In Event #4 – the $1,500 buy in 7 Card Stud Hi/Lo – a lot of players drifted over after busting out from either the donkament or the heads-Up event. Daniel Negreanu was one of the early chip leaders, but soon wilted back into obscurity, while Phil Hellmuth – fresh from his record 86th cash in a WSOP event – tweeted Sat down in WSOP $1,500 Stud 8/b. Started w 4500, up to 11K. Could be best event of WSOP…Seems like players are lost in this game.

What to Look Forward to Today

Today (Wednesday) sees the start of the $1,500 buy-in Pot Limit Hold´em bracelet event, which last year attracted 765 players and awarded Brian Rast the first of his two bracelets in 2011. We also look forward to the final table of Event #2, rounds 4-6 in the Heads-Up NL Hold´em /PL Omaha Event #3 and Phil Hellmuth´s 87th min cash in the 7 Card Stud Hi/Lo Event #4. Keep up to date with what is happening at the WSOP with Poker news Report or follow us on Twitter @PokerNewsReport.

One Reply to “WSOP Heads-Up Fails to Reach Max Field”