The World Series of Poker (WSOP)’s November Nine may just be a few days away, but it seems this could well be the last hurrah for the delayed final table. 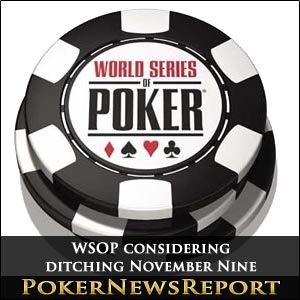 The World Series of Poker (WSOP)’s November Nine may just be a few days away, but it seems this could well be the last hurrah for the delayed final table.

Never fear, the WSOP organisers are not preparing to pull the plug on the event. However, it does seem likely that the three-and-a-half month wait to crown the main event champion could be coming to a swift close.

That lengthy hiatus has never sat well with the majority of poker fans since first being introduced in 2008, even though the WSOP believed that the broadcasting of numerous events from the summer series as a build-up to the live coverage of the WSOP November Nine was a profitable policy.

The nine finalists – Martin Staszko, Eoghan O’Dea, Matt Giannetti, Phil Collins, Ben Lamb, Badih Bounahra, Pius Heinz, Anton Makiievskyi (my favourite for the title) and Sam Holden – will no doubt be thrilled to finally be given the opportunity to make their play for the $8,711,956 top prize and gold bracelet in Sin City between Sunday and Tuesday.

But should they really have had to wait that long? No, of course not. Surely it would be better for the game of poker if they were allowed to play out the final table immediately? Yes, it would. And wouldn’t it be more useful to return the previous situation where the final table was in fact played to a conclusion? Most definitely. It’s that simple, really.

Still, maybe the players themselves wouldn’t agree as the intervening months allow them to secure sponsorship, while the WSOP also utilises the time for promotion. Maybe someone at the WSOP should have asked the players what they think about the format, though.

Either way, what many players and railbirds have long hoped for could well become a reality, if the words of Seth Palansky, the WSOP communications director, are to be believed.

Palansky spoke to PokerListings about what many believe to be a pointless exercise, suggesting that the WSOP have already considered “tweaking” the format. A ‘tweak’ is not good enough, however, with only a return to the previous format sufficient to appease many poker fans.

But Palansky readily admitted that ESPN’s live coverage of the main event back in July could well have a major influence on future plans for the tournament.

The American cable television network broadcast 45 hours of live play from the main event, with insiders suggesting that the healthy audience figures achieved prove that a delay between the final table being established and the November Nine taking place is probably not the best way to make the most of the excitement surrounding the tournament.

In fact, Palansky admitted that he and his fellow WSOP organisers are preparing to “revisit the concept after this November”. Sounds like a good plan, don’t you think?

Moreover, the communications director already appears to have lost faith in the near-four-month interruption when saying that, “if you’re doing something live, do you really need to delay it four months and try to build this anticipation to get people to watch?”

No, of course you don’t, Seth. We were all ready for the big game – and then there is an almost arbitrary break that lessens the exhilaration already built up. At least, that’s how I feel. But what about you? Certainly, Palansky has reservations about the concept. Note that he added: “It doesn’t quite work.”

So, now it’s on to Sunday at the Rio All-Suite Hotel & Casino, where our November Nine will battle it out for the biggest prize in poker. Let’s just hope next year’s final table is played in July…