It took a bit more than a month and a half, but WSOP.com has overtaken Ultimate Poker in a seven-day average of cash game player traffic. 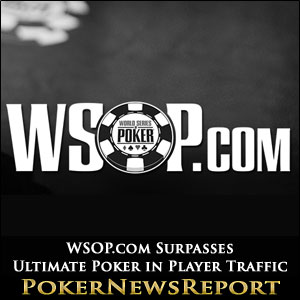 It took a bit more than a month and a half, but WSOP.com has overtaken Ultimate Poker in a seven-day average of cash game player traffic.

As of this writing, WSOP.com averages 129 players in that weekly span, while Ultimate Poker clocks in at 123.

Nevada’s only two regulated online poker sites had been waging a war of sorts for market share ever since WSOP.com entered the online space on September 19. Prior to that, UP had enjoyed about four and a half months of being the only legal poker site available to Nevada residents and tourists.

Many had predicted that Caesars’ WSOP-branded poker site would eventually win the turf war between the two considering that the WSOP has tremendous brand name attraction. That attraction includes the prestigious WSOP Main Event that just played to a conclusion at the Rio All-Suites Hotel and Casino in Las Vegas.

Ultimate Poker had been trying desperately as of late to hold its lead in the tiny Nevada market that caters to about 2.7 million residents and any tourists within state borders who care to play poker online legally. UP recently added new games such as Omaha and Omaha Hi/Lo to its offerings after operating the first five months of its existence with only Texas Hold’em.

While the additional game choices were popular, the new options at UP could not stop players from logging on at a site that bears a name that holds tremendous respect within the poker community. The World Series of Poker has been running live tournament events for 44 years and is synonymous with outstanding poker action.

Whether or not UP can ever regain dominance in the market remains to be seen. However, the smart money is on WSOP.com continuing to lead the way in Nevada. That includes whatever sites may join the mix in the future such as offerings from Treasure Island and South Point Poker.