Caesars Interactive Entertainment teams up with the World Series of Poker to bring online poker for real money to Nevada. 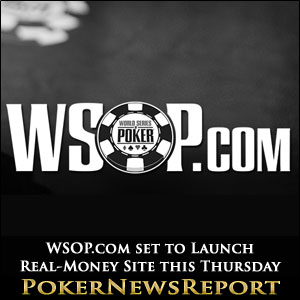 Caesars Interactive Entertainment teams up with the World Series of Poker to bring online poker for real money to Nevada.

Yesterday, it was announced that the WSOP.com poker site will be going live on the morning of Thursday, September 19th. The announcement was made via a conference call with the World Series of Poker, during which representatives of the site answered questions from reporters.

WSOP.com will only be available to residents of and visitors to Nevada. The site requires that participants be at least 21 years of age and that they pass a mandatory screening process.

During the conference call, representatives of WSOP.com announced that they are in favor of an interstate compact with New Jersey and support federal online poker legislation.

The WSOP feels that by combining a recognizable and well-respected brand with the latest technological innovations that it can offer an unrivaled poker offering to satisfy today’s technologically savvy customer. As to be expected from a site bearing the World Series of Poker brand, WSOP.com will offer a plethora of satellites into the WSOP Main Event and other WSOP bracelet events. Players will also be given the opportunity to win a WSOPE Main Event package, valued at more than $13,000.

Upon launch, WSOP.com will be subjected to a field trial period during which operations will be closely monitored by Nevada regulation authorities.

Besides the satellites into WSOP events, not too much about WSOP.com stands out as particularly exciting or different. It will offer the usual array of cash games, SNGs and MTTs, spread short-handed and full-ring NLHE, FLHE, PLO, O8 and 7-Stud and will run daily freerolls. The VIP program, entitled the Action Club, will be based on the contributed rake system, and the site will permit a variety of deposit methods including Visa, MasterCard and e-checks.

Of note, is that players will be able to redeem their loyalty points for more than just tournament entries.  Action Club Rewards can be converted to Total Rewards Casino points, which will allow players to save on everything from hotel rooms to shows and WSOP tournaments, in so long as the player redeems them at a Total Rewards casino, of course.

There will be no mobile version of the site at launch. However, a Mac client will be available for download. To date, over 12,000 people pre-registered for the site.

And in the spirit of the WSOP, the site will be hosting the WSOP.com Online Championship, where the winner of each event will receive an automatic entry into the online equivalent of the November Nine. This “Online Nine” tournament will overlap with this year’s Main Event Final Table.  The nine events will feature $500k in added prize money – certainly not a bad incentive for playing.

Whether the WSOP, who opened a real-money site in the UK in 2009, will be able to find success in the United States is yet to be seen. But given its long standing reputation in the industry, it’s certainly possible that WSOP.com will differentiate itself from the masses of poker sites set to launch in the states over the next few months.