This Wednesday should be it: legal real money poker for people from Nevada on wsop.com to coincide with start of WSOP. 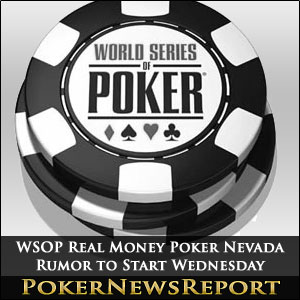 This Wednesday should be it: legal real money poker for people from Nevada on wsop.com to coincide with start of WSOP.

After a series of rumored launched dates have been reported and almost immediately retracted, sources are now saying that the long awaited entry of WSOP.com into the realm of legal real money play in the US will launch on Wednesday.

WSOP and Caesars Interactive were one of the groups granted a license in 2012  when Nevada and the Nevada Gaming Commission gave the ok for real money poker in the state.

WSOP.com will become the second legal site in the state. Launching on the first day of the WSOP will be an immediate shot in the arm to the site. Station Casinos launched UltimatePoker.com with Ultimate Gaming three weeks ago to a great deal of fanfare and player approval.

WSOP.com started beta testing of their site with Nevada residents in April of this year.

WSOP teamed up with 888Poker to provide the software for the site and game security, while WSOP will use their obvious clout and name value to market the site. 888, which is a partner with several Nevada online license holders, has been promoting the launch of the site for months but has not publicized a launch date. 888 will also be working with the WSOP for a European online site.

WSOP.com will reportedly immediately begin to offer satellites to this year’s WSOP main event which begins on July 6.

WSOP sign up and account funding will operate in a similar manner to that of Ultimate Poker. Players will have to be at least 21 and located in Nevada. Location verification will be accomplished by pinging the customer’s cell phone. Players wishing to play may sign up prior to being in the state. UltimatePoker players can fund their accounts at any Station Casino property, by PC check, wire transfer and by mail. So don’t be surprised to see extremely long lines to sign up and deposit at booths in the hallways leading to the Amazon ballroom at the Rio. Likewise expect to see lots of players at the tournament tables replacing their Open Face Chinese play with WSOP Main Event satellite play.