Aiming to draw attention to their new poker site in Nevada, WSOP.com will present the Online Nine just prior to final table competition of the 2013 Main Event. 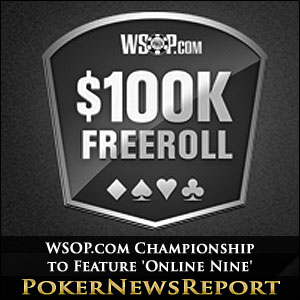 Aiming to draw attention to their new poker site in Nevada, WSOP.com will present the Online Nine just prior to final table competition of the 2013 Main Event.

The marketing strategy will mix WSOP’s powerful brand name that is known the world over for staging poker’s premier live tournament series with its new online endeavor that launched less than two weeks ago. The Online Nine will be comprised of the nine winners of the WSOP.com Online Championship that kicks off October 25 and runs through November 2.

The Online Championships are open to players residing or visiting Nevada and will feature buy-ins ranging from a freeroll up to $200 + $15. Two of the nine events require a small buy-in of only $25 + $2.50, but many players will likely take advantage of the available rebuy and add-on opportunities. WSOP will kick in added prize money of $500,000 throughout the Online Championships.

The Online Nine will gather at the Rio All Suites Casino Hotel and Resort on November 4. They will play a special online SitNGo freeroll with a prize pool of $100,000. The Champions Freeroll will break when the final two players remain, with the heads-up combatants scheduled to conclude the event the following day at a live table at the Penn & Teller Theatre.

Players and fans got a taste of WSOP’s marketing strategy earlier this summer during the 44th annual WSOP held at the Rio. The casino was pasted with advertising touting the upcoming launch of WSOP.com in the Silver State.

Caesars was hoping that its online rollout would coincide with the live events that awarded 61 new WSOP bracelets, with poker’s most prestigious annual bracelet still waiting to be won. Unexpected delays postponed the debut of WSOP.com until September 19. With the playing of the Main Event final table yet remaining, WSOP has taken the opportunity to cross-market its online offering with the live November Nine competition.

While the launch of WSOP.com had initially been fraught with some bugs such as failed credit card deposits, indications are that players are leaving Ultimate Poker and clicking on over to Caesars’ new online site. This past weekend, WSOP.com posted its highest cash game player traffic numbers since launching.

Those additional players must have come from UP, as the first regulated site in the U.S. experienced its lowest traffic numbers since right after its April 30 launch. UP still has about 75% more player traffic than WSOP.com. Expect that advantage to erode as WSOP.com begins a marketing campaign that mixes online and live poker play.