Although the official real-money launch won’t commence until tomorrow, September 19, players who had pre-registered at WSOP.com have begun competing for cash. 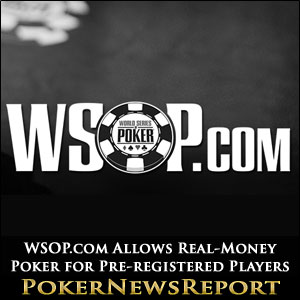 Although the official real-money launch won’t commence until tomorrow, September 19, players who had pre-registered at WSOP.com have begun competing for cash.

An email arrived in the in-boxes of existing play-money players that provided a link to become WSOP.com’s first real-money players by downloading a new version of the software. That newly-downloaded client provides access to a cashier and real-money ring games, SitnGos, and multi-table tournaments.

While the real-money action is somewhat sparse until the official debut at 9:19 a.m. PST on Thursday, freerolls that pay out winners in cash and micro-stakes No-Limit Hold’em cash game action is underway. Those competing at the early real-money online poker tables at the worldwide-renowned brand of WSOP may consider their exclusive ability to compete for cash a treat, but the real prize will come tomorrow when WSOP.com executives flip on the virtual switch for all Nevada residents and tourists.

Ultimate Poker has enjoyed a monopoly on the Nevada online poker market since April 30, but that will all change with WSOP.com becoming the second regulated Internet poker site in U.S. history. The software comes courtesy of a partnership with 888 Poker, with the companies already operating an online poker offering in the UK.

Unlike Ultimate Poker, WSOP.com has decided not to sign any pro players as ambassadors at this time. This seems to buck a trend that finds many online sites looking to attach themselves to a high-profile player. But the brand name recognition that WSOP already enjoys may allow the site to forgo any such sponsorship deals.

It is also that powerful brand name that will likely allow WSOP.com to gain the top spot in the Silver State market in terms of player traffic. Although Ultimate Poker’s launch can be considered a success despite the initial bugs and geolocation problems that needed to be remedied early on, look for WSOP.com to become a more popular site for those playing online poker within Nevada borders.

With the allure of playing online satellites and qualifiers in hopes of winning seats to live WSOP tournaments ala Chris Moneymaker in 2003, players may naturally gravitate to WSOP.com. Of course, other [geolink href=”https://www.pokernewsreport.com/us-poker-sites”]US friendly poker sites[/geolink] can also offer similar tournament packages, but if marketed correctly, WSOP.com can be the site that players flock to while residing in Nevada or visiting Las Vegas.