The WSOP is giving away more than $700,000 to those who pre-register for a free online poker account. 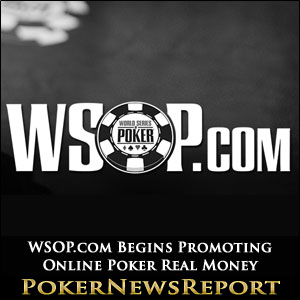 The WSOP is giving away more than $700,000 to those who pre-register for a free online poker account.

The fact that online, real-money poker games haven’t started yet hasn’t deterred the WSOP from giving away over $700,000 in prizes to cash and prizes. For a limited time, anyone who pre-registers with the site (WSOP.com) will have the opportunity to win prize packages, tournament entries and much more.

Entitled the “Hot Seat” promotion, the first WSOP promotion is geared towards players who sign up for WSOP.com and lower themselves to wearing a WSOP.com patch on their chest at the poker table. Committee members from the WSOP will randomly select 64 players brandished with the patch, and wire $500 dollars directly to their accounts, that is, once the site goes live.

In addition, players 21 years of age and older who pre-register will be entered into a 36-Seat Giveaway. Each day, a winner will be randomly selected to play in the next day’s early event. Sounds like a great idea, but what if a player doesn’t check his e-mail that day, or decides to go out partying the night before? In that case, the seat would be forfeited, and the player would miss out. So, be sure to check in with the site daily.

Colorado Casino dealer Ambrosha S. Harrell was awarded with the first paid entry of the giveaway, and has been invited to try her luck at tomorrow’s NLHE event.

One lucky winner will be entered into the One Drop Event. At an entry price of $111,111, the High Roller event features the biggest buy-in of this year’s WSOP, and could be worth several million dollars to the winner. A more than 10 million dollar prize pool is expected.

Finally, WSOP.com has announced an online version of the Main Event. Entitled the WSOP.com Online Championships, the event will feature $500,000 in added prize money and culminate in a live tournament. By signing up for an account, registrants will be entered into a $100,000 free roll that will serve as the inaugural event of the championship series, with the winner becoming a member of what the WSOP.com calls the “Online Nine” (get it?).

Then, as you might suspect, eight more tournaments will be held, with each winner making up another part of the Online Nine. After all nine participants have been verified, they will play in a massive free roll at the Penn & Teller Theater Stage, which ultimately acts as the undercard for the final table of the Main Event. The free roll will take place on November 4 and 5.

Although considering the amount of US players itching to get back to the virtual felt, actually winning something may prove fairly difficult. But give the WSOP credit – they sure know how to run a promotion.